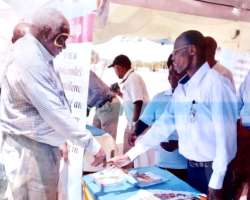 It was on 9th October 2014, at the shores of Lake Turkana, near a lakeside town known as Kalkol, at a beach facility known as Eliye Spring, which is three hundred kilometresSouth of Lodwar Town, that I came within eyeball to eyeball distance with Emilio Mwai Kibaki. Kibaki had come to attend the Turkana County water summit. This regional summit had been organized by Mount Kenya University (Turkana Chapter) under the able leadership of Felix Sialo, the then Principal. By that time, Mwai Kibaki had also retired from conventional politics a year earlier. He had exited politics asthe President of Kenya in 2013. Still, his presence at the summit exuded public confidence, wild charisma and public activation across class and stations to an extent of looking at the current environmental matters beyond water summit to politics of construction of the Mega Dam on River Oromo in Ethiopia, a river that is the main natural supplier of water to Lake Turkana.

Local politics wanted to cheapen the spirit of the moment down to Kenya’s obvious political behaviour being swamped in quack-mire of ethnicity and political identity, a vice so rife in Turkana Politics at that time and even now. However,Kibaki, a very brilliant economist, suave politician and gifted social thinker remained focussed by encouraging the local communities to identify the real issues that are behind poverty and ecological incapacity in Turkana County. When he stood up to speak, all of us in the audience went stone silent. He smiled and looked around; he evidently smiled to a young middle-aged girl sitting in the gallery before him. Kibaki alsoshouted to all of us present to move away from the land that belonged to the lake, he shouted at all those selfish and ‘chicken-shit’ of investors encroaching to build stupid hotels into the shore-lines that make up the land of Lake Turkana.He shouted at all those people who were present to respect the lake resources , to stop irresponsible gossiping and respect theland that belonged to lake Turkana . Kibaki admonished all those leaders that never respected realities of Nature.

It was so exemplary; Kibaki did not lower himself intellectually to participate in chicanery culture of the Turkana Politics of that time. It was so unfortunate that Turkana Politics at that time had no pinch of environmentalism not has yet displayed any evidence of beginning to evolve to consciousness about environment, ecology and protection of nature’s potential to sustain itself and sustain human life as well as other fauna and flora of the given region.

That was that, but before Kibaki became the President, general politics of the day had made Kenya had to sink intodestructive politics that thrived on environmental degradation for twenty-four years. The preceding twenty-four years of Moi justified the politically correct persons in the likes of Nicholas Biwot to loot and make themselves dollar billionaires through poaching of lions, ruthless pollution of Lake Naivasha-water through eco-hostile flower farming, grapping of lands along the Indian Ocean coastline to build beach hotels, poaching of rhino for horns, elephants for tusks ,pythons and leopards for skins or hides . Indeed, Kenya’s ecological democracy was suffocation under the politics of state justified looting and land grabbing of wild stature.

It was under Kibaki Presidential leadership that the two decades of mad-mad injustice on Kenya’s ecology stopped. Kibaki’s leadership brought to Kenya legislative civilization which recognized and penalized environmental crimes through Act of parliament , this was in sharp contrast to Moi’s time when the government itself through initiative of the President chose to cut down the indigenous trees of Karura for President Moi and his politically correct friends to build storeys for commercial offices.

Above all else, leadership with a focus on ecological democracy, democratization of ecology and liberalized liberation of ecological democracy in Kenya came to see the light under Mwai Kibaki’s time. In Kibaki’s second term, Kenya was lucky to celebrate a dispensation of a very revolutionary 2010 constitutional change, a constitutional change that came with a fully-fledged proactive chapter on protection of ecology a clause declaring right to un-polluted environment as fundamental human right of all the people living in Kenya.

In a word, it is historically evident that Political economy of Kenya begun respecting geospatial information resources by investing in geospatial infrastructures and institutions through well-informed political leadership of Mwai Kibaki. He never divorced environment from economic development in his system of planning for national development, he did not allow tyranny of financialization of ecological resources by Kenya’s patrimonial bourgeoisie to take place the way it was and it is now. This virtuous leadership will actually remain a desire for ages among the people of Kenya.

Back to Turkana Water summit, even though the Helicopter that carried Kibaki stuck in the sand dunes on the shores of Lake Turkana, But Kibaki did not waver in his emotions and mental energies necessary to direct the people on the right course. He appreciated the initiates taken by the Principal of Mount Kenya University to organize such a timely summit. In fact, Kibaki encouraged Felix Sialo to try his hand in public leadership. However, when the local authorities wanted to take Kibaki to visit the Lodwar Museum, Kibaki refused. This was a break in the tradition by all other political leaders that whenever they come to Lodwar, they always get excited to visit the Lodwar Museums where Jomo Kenyatta, Paul Ngei, Ramogi Achieng Aneko and other three freedom fighters were detained during the anti-colonialist movements.