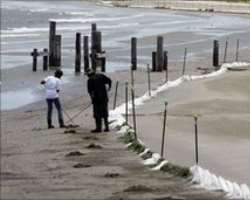 Testing of BP's newly capped Gulf of Mexico oil well has been extended for a further 24 hours.

The US official in charge of the spill clean-up, Admiral Thad Allen, said the “integrity test” would not stop until Sunday afternoon.

He added that when the test ceased, containment of the spill using surface ships to collect oil would resume.

The new cap has managed to stop the flow of oil for the first time since the well exploded three months ago.

In a statement, Adm Allen said: “Based on the data and pressure readings compiled to date, the test has provided us with valuable information which will inform the procedure to kill the well and a better understanding of options for temporary shut-in during a hurricane.

“As we continue to see success in the temporary halt of oil from the leak, the US government and BP have agreed to allow the well integrity test to continue another 24 hours.”

He added that at the end of the test, the surface ships resuming collection of leaking oil would have the capacity to take up to 80,000 barrels per day.

Correspondents say this switch-over will see crude oil flowing into the Gulf once again, on temporary basis, as pressure is relieved.

BP is drilling relief wells which aim to intercept the leaking one at the end of July, enabling it to be sealed by mid-August.

The spill has been described as the worst environmental disaster the US has ever seen.

Eleven workers were killed when the Deepwater Horizon rig blew up on 20 April.

The subsequent spill has affected hundreds of miles of Gulf coastline since April, with serious economic damage to the region as tourists have avoided Gulf Coast beaches and fishing grounds have remained closed.

The company is evaluating a further 17,000 for payment and is seeking more information on 61,000 other claims.