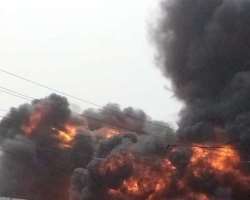 Residents of Umuahia, the Abia State capital, scampered to safety on Saturday morning when a diesel-laden tanker exploded in a petrol filling station identified as Master Energy.

It was learnt that the tanker was discharging diesel to the underground tank when the fire incident occurred.

As it were, the cause of the inferno is yet unknown, but the fire lasted for over two hours, with little or less impact from the state fire service to stop it.

The filling station is located close to some residential buildings along Aba Road and few meters away from the city center.

Many residents were seen with buckets of water while supporting efforts of firefighters to contain the inferno.

The incident caused panic in the area as vehicles were temporarily abandoned within the filling station.

Some residents also fled the area to avoid being caught up in the explosion.