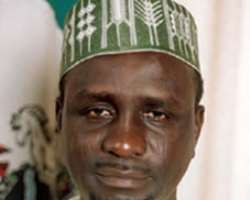 Saturday Sun gathered that the ANPP is working with the Action Congress (AC) and the Labour (LP) to present a joint candidate, reminiscence of the All Peoples Party (APP)/Alliance for Democracy (AD) arrangement in 1999.

Sources close to the ANPP told Saturday Sun that Shekarau, who has been going round the country consulting stakeholders, is working on entering into an agreement with other parties for an alliance, in order to win the presidential election.

Shekarau paid a visit to Afenifere leader in Akure, capital of Ondo State a few weeks ago. Although, he was said not have discussed his presidential ambition, it was gathered that from the story he told his hosts, he indirectly sold his candidature to them. He was said to have impressed the leadership of Afenifere with his humble and penetrating speech.

Sources said that the leader of Afenifere, Chief Reuben Fasoranti and the entire leadership of the group are already committed to the Shekarau presidential project, although the Afenifere leader told Saturday Sun that Yoruba leaders were yet to meet to discuss who to support among the numerous presidential aspirants.

Last week, the leadership of the Action Congress (AC), led by Chief Bisi Akande, reached out to leading members of the political parties that have agreed to work together. According to sources, Akande and other leading members of the AC were with Fasoranti, in Akure two weeks ago on the proposal from the Shekarau camp.

It was gathered that owing to the importance of the political engineering, Akande, as the chairman of AC, had no alternative but to go to Fasoranti to secure the support of Afenifere, in the new political alliance. Those privileged to have access to the meeting between Akande and Fasoranti told Saturday Sun that the question they asked themselves was: 'Why are we fighting ourselves?'

Meanwhile, top among those jostling to be Shekarau's deputy are Tinubu, Osoba and Mimiko.

Sources revealed that some people are opposed to the choice of either Tinubu or Mimiko over religion. The alliance does not want a Muslim-Muslim ticket, which, it fears, would not be accepted by Nigerians. Tinubu is a Muslim, while there is contention as to whether Mimiko is a Muslim or Christian. However, those who know the Ondo State governor well say he is a Christian.

What is working for Osoba, it was gathered, is that his party is pushing to present a Christian running mate to Shekarau. But those who favour Tinubu argue that he is popular in the South West, as his tentacle is spread in all states in the zone Also, Tinubu's financial muscle gives him an edge, as the presidential project is capital intensive.

Sources revealed that the Labour Party is still weary of the alliance that would present Shekarau as presidential candidate. The party, it was gathered, is afraid to gamble with Mimiko, its only member holding executive position. The party's fear is that if Mimiko relinquishes his post to run as vice presidential candidate to Shekarau and the coalition fails to win the election, it would be tragic for it.

Alhaji Lai Mohammed, the publicity Secretary of the AC, told Saturday Sun that his party had reached an alliance with other parties with the intention of coming together to contest the 2011 election. He disclosed that the AC had the mandate to change its name with the Independent National Electoral Commission (INEC), as it would be difficult to register a new party. He identified the ANPP as one of the parties that has reached agreement with his party.

It was gathered that the AC may change its name to Action Congress of Nigeria (ANC) to incorporate other political parties that would work with it.

Sources revealed that there are, however, fears that Shekarau may experience paucity of fund in his presidential project. It was gathered that he raised money for his governorship election from the poor people of Kano who contributed what would pass for their widow's mite, which made up more than 30 per cent of the money spent on the election. To raise the money to effectively challenge the mighty machine of the PDP at the general elections is a matter being seriously considered by his supporters. This is where the Tinubu factor came in.

This is not deterring the Shekarau camp. According to a bigwig in the camp: 'Our consolation is that we have people behind us. Things are taking shape. We have to postpone the date of declaration of Shekarau because we have not been able to raise the money for it.'