... Cautions F-G On The Planned Removal Of Subsidies On Petroleum Products. 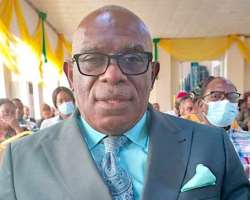 Mrs. Ezeilo - Deputy Governor of Enugu State - flanked by other dignitaries at the high table

In the words of the out-going ECCIMA president who had expressed ECCIMA's committed to the promotion of business and economic development as well as collaborating with various levels of government in boosting business and investment opportunities in Enugu State, South East and, indeed, Nigeria said, "Permit me to use the opportunity of this opening session to bring to the attention of the Federal Government of Nigeria some issues of economic importance. We commend the National Assembly for the speedy passage of the 2022 budget of NGN 17.1 trillion. However, we are concerned about borrowing of NGN 5 trillion to finance the deficits of the budget. The debt burden on our economy, especially that of the continuous borrowing from the CBN has left our exchange rate on all-time low. Efforts must be made to save the Naira and the economy". Barr Jasper Nduagwuike (President-elect of ECCIMA)
Expressing worries over the new tax regime imposed by the Federal Government on non-alcoholic beverages, the business mogul said "The chamber is worried about the Federal Government plan to introduce NGN 10 per liter tax on all non-alcoholic, carbonated and sweetened beverages through the Finance Act signed into law by President Muhammadu Buhari on 31st December, 2021. Sincerely, we think that this tax if implemented would be counter-productive as reason stated by the Federal Government for imposing this tax does not outweigh the unemployment issues it would generate. However, ... we suggest that high import duties should be placed on foreign manufactured drinks only to encourage our local beverage drink manufacturers".

Concluding, Sir Emeka Nwandu on behalf of ECCIMA appealed to the Federal Government to "play with caution on the implementation of the Petroleum Industrial Act and the potential removal of subsidy planned for this year, 2022, to avoid inflationary pressures that could be detrimental to household income considering the slow pace of household income growth in Nigeria since 2015". The 48th Annual General Meeting of Enugu Chamber of Commerce, Industies, Mines and Agriculture was declared open by the Governor of Enugu State, Rt. Hon. Ifeanyi Ugwuanyi, who was represented by the Deputy Governor of Enugu State, Barr Mrs. Ezeilo. Other dignitaries who attended the occasion included the Director-general of South East Chamber of Commerce, Industries, Mines and Agriculture, SECCIMA, Engr. Nduka Awuregu; Enugu State Commissioner for Environment, Mr. Chijioke Edeoga; Permanent Secretary of Enugu State Ministry of Commerce and Industry; captains of industries; and representatives of Comptroller-generals of Customs; and Immigrations respectively; and other critical stakeholders in the business sector.

Highpoints of the occasion were the presentation of the report of chamber's activities; presentation of the audited accounts of ECCIMA by the external auditors; dissolution of the out-going council and election of new council which president is Barr Jasper Nduagwuike who in his acceptance promised to build on the many achievements of his predecessor and to pursue relevance. The investiture of the president-elect of ECCIMA and the new council is scheduled to hold on 4th and 5th February, 2022.