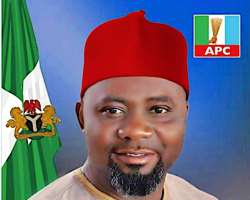 Barely 24 hours after Governor Dave Umahi of Ebonyi State officially intimated President Buhari of his intention to succeed him in office come 2023, the Ebonyi State chairman of the All Progressive Congress, Stanley Okoro Emegha, has solicited massive support for the governor.

Emegha who briefed newsmen at the Party's Secretariat in Abakaliki on Wednesday, Described the Governor's move as a bold step for the good of the country.

He expressed confidence that Umahi's presidency would bring massive infrastructural development and economic prosperity to Nigeria and its citizens.

Hinging his convinction on Umahi's monumental achievements in both his private life and his stewardship as State Governor, Enegha, maintained that Umahi, as President would replicate his landmark achievements in Ebonyi State at the national level.

Emegha stated: "Let me inform Nigerians both at home and in diaspora that Governor Umahi's decision to join the presidential race is the best thing that has happened to the entire country, Nigeria, considering his precedence and genealogy.

"Just like what he said on the Channels TV where he promised to replicate his Progressive efforts in Ebonyi at the National level, my Governor is not contesting with anybody but with himself in total obedience with the party's decision".

"Those who knew Ebonyi state before the coming of Engr David Umahi can be the judge.

"Under Umahi, Ebonyi has been transformed and now competes with developed countries.

"Aside the road network across the nooks and crannies of the state, there have been constant streetlight since he took over the mantle of leadership.

"I therefore call on all Nigerians irrespective of ethnicity, belief and other attachments to please queue into this dream of making the country greater by supporting Umahi to become the next president."

Emegha, who also doubles as the Special Security Consultant to the state government also emphasized that apart from the massive infrastructural development, the administration of Governor Umahi has also brought an appreciable level of peace to the people, thereby making life more meaningful and satisfying.

He further maintained that Umahi would effectively employ his detribalized attributes and peaceful disposition to foster national peace and cohesion if supported to succeed Buhari in 2023.