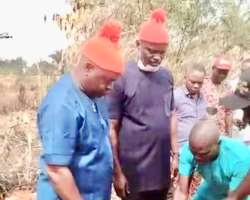 Prominent sons and daughters of Ihiala LGA who were present to witness the epoch-making event at the Uli Civic Centre, Ihiala Local Government Area of the State, in their separate speeches lauded the initiative.

Speaking at the occasion, Ichie Simeon Ohajianya thanked Hon BCO Uzoma for attracting the project, affirming that his partnership with the Federal Fire Service to carry out such an essential project in Ihiala LGA is highly appreciated.

In his remarks, Ichie Ifeanyichukwu Orjiakor noted that with recent fire outbreaks wrecking havoc on the properties and economic life of the people, one will have a better understanding of the huge relieve the standby fire service station project has offered the people. He further thanked Hon BCO Uzoma and members of NOUF for the project.

The Chairman, NOUF Building Committee, Hon. BCO Uzoma in his speech thanked the Federal Fire Service Agency and all members of NOUF for the partnership project, stating that a fire service station is vital to areas of commerce and industries. According to him, Such a station, if well funded, will offer timely response in times of fire emergencies. He promised that the partnership between NOUF and the Federal Fire Service will go a long way to ensure that the project is completed in record time.

Mr C.Don Adinuba represented by Enzo Uzor Nzeribe, also thanked NOUF for the project, stressing that the recurrent fire outbreaks within major markets in Anambra State in the recent times, makes it quintessential for such a project to be a necessity across various parts of the state. He lauded members of NOUF for partnering with the Federal Fire Service in bequeathing such asset to Ihiala people.

IDr ABC Orjiako (Onwa) in his address further lauded the partnership project and implored all well-meaning sons and daughters of Ihiala to embrace the project.

Representing Karebo Samson the acting controller-general of the Federal Fire Service, ACG Chika Njoku the zonal Commandant of the service stated that the Federal fire service is determined to get it's services closer to the people as it's the service's basic and most vital responbility. He thanked the people of Ihiala for facilitating the project.

Other dignitaries at the event include, stakeholders and elders of Ihiala Town, gentlemen of the press, etc.