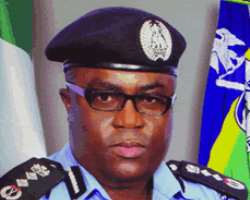 Onovo, IGP
Following the failure of the kidnappers to obey the 24-hour ultimatum by the Inspector General of Police, Mr. Ogbonna Onovo, to release the four journalists and driver abducted six days ago, the Police has commenced a house to house search in suspected areas.

Onovo told newsmen yesterday that he was optimistic that by today, the victims would be found.

'I gave them 24 hours but 24 hours have come and gone and we have not seen them. So, our men have entered into the suspects' enclave and we are searching house by house, community by community one after the other.

'We are searching the areas where we believe they are hiding. We are searching for them one after the other. Hopefully by the end of the day, we will recover them wherever they are,' he said.

The IG said the police need more security gadgets such as telephone tracking machine, the involvement of town union leaders and vigilance groups.

He insisted on his stand that people should stop paying ransom, stressing that 'when people refuse to pay ransom, of course, kidnapping will stop because they see it as a business. They engage in such criminalities to make money. It has been commercialised. When no money is forthcoming, the business will stop,' he reasoned.

600 suspects arrested
No fewer than 600 kidnap suspects including senior police officer have been arrested by the Police in the South-east.

Inspector-General of Police, Mr. Ogbonna Onovo who disclosed this yesterday in Awka during a meeting with Anambra people said that out of the 600 suspects, 400 were arrested in Anambra State.

The meeting which was held at the Women Development Centre, Awka had in attendance major stakeholders including the Deputy Governor, Mr. Emeka Sibeudu, who represented the Governor, the Speaker of the state House of Assembly, Hon. Anayo Nebe and some of his colleagues, traditional rulers, town union executives, vigilantes and the police.

Addressing the meeting in Igbo language and in an emotion-laden voice that touched the hearts of the participants going by their reaction later, Onovo added that the senior police officer had served in Anambra State before now.

He also warned that henceforth, any Divisional Police Officer (DPO) in whose domain kidnapping takes place would be dismissed from the service.

Onovo who was reacting to the allegation of involvement of some policemen in kidnapping, admitted that there were some bad eggs in the police as the issue of violent crime could be traceable to some policemen as confirmed by the arrest of a senior police officer.

The police boss. However, urged the people not to be discouraged. He told them to continue to give useful information to the police, saying, 'You can give information to police by calling the police commissioner or any officer in the force but I can understand your fears about that. We know that there are bad eggs in the police.

'Even this kidnapping has some policemen as collaborators and one of them has already been implicated and arrested. But that should not discourage people from giving useful information to the police,' he said.

He urged the traditional rulers to give the police serious support as the alarming rate of kidnap in Igboland was giving sleepless nights as a native of Igboland.

The IG noted that all those arrested for kidnapping are all Igbos, insisting that they live among the people in the communities and should be fished out by the traditional rulers instead of accepting people who have no means of livelihood but live in affluence.