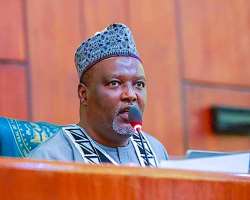 The fight against institutional corruption in Nigeria under the current democratic experience has remained an unending battle without victory in sight. This is as the symptoms of failure exhibit themselves in virtually all daily affairs in the country. Information available to 247ureports.com collated from a consortium of competent sources indicate how dirty politicians use their positions as representatives of the people to deceive the people they are supposed to represent. This investigation exposes the corrupt activities of Nigerian politicians chosen by their electorate to represent them at the Green Chamber of the National Assembly.

One of the poster baby for the deceptive practice is arguably one of the most corrupt elected official in Nigeria – the current Deputy Speaker of the House of Representative, Honourable Ahmed Idris Wase – who hails from Bashar in Wase local government area in Plateau State. According to estimated records, Hon. Ahmed Idris Wase has amassed billions of Naira deceptively using unexecuted constituency projects and unexecuted contracts received from federal ministries through numerous companies acting as “fronts”.

In the current year’s appropriation bill, the Wase constituency which Hon. Ahmed Idris Wase represents at the House of Representative has N605million allocated to the constituency as constituency project for the year – specifically for the rehabilitation of Naki, Gori-Yola Wakat road [N315million – CODE ERGP12160785], provision of power to Mavo community [N40million – CODE ERGP10158648] and rehabilitation of Jigawan Audu – Val road Section II [N250million – CODE ERGP12160715]. Available information indicates the three projects remain unexecuted while the entire project amount has been remitted to the supposed “fronts” of the Lawmaker. In addition, it is discovered that the lawmaker has not executed a single constituency project since he became a lawmaker in 2007.

Idris Wase’s deceptive tendencies, according to our source, stretched beyond unexecuted constituency projects, he was able to rake in an additional N137,364,266.34 from seven [7] unexecuted contracts awarded to his company and to other companies acting as “fronts” for him.

Below is a listing of the unexecuted contracts – including evidence of payment:

Interesting and yet disheartening aspect of the above list projects are that none of the projects were executed – nor were the contractors ever present at the supposed construction site. Items number 6 and 7 above depicts the nature of the syphoning at play. Item number 6 showed that a payment was made for consultancy services for Wamba-Wase road in January 2019. Although the road construction was never started, another payment was made on December 2019 for the emergency rehabilitation of the same road.

On Item number 3, where erosion control project awarded to Walbansa Nig LTD received payment for the sum of N19,580,232.55 in July 2021 – it is noteworthy that the company belonged to Ahmed Idris Wase before he was indicted by the CCB in 2015/16. In response, he sold and/or transferred his shares to son. He transferred ownership to his son – and continued award of contracts to his firm.

While the deputy speaker and his cohorts partake in the spoils of corruption without recourse to the ailing community that voted him into power, the entire local government of Wase is reported to not have access clean drinking water, decent roads or considerable access to power supply. “In the entire constituency, there is no project he initiated and completed worth N50million since 2007. The local government area was created in 1976 but it still looks a glorified village. He claims to have sourced employment opportunities to the unemployed but that’s a farce. His representation is lopsided. It favours his district more (Bashar).”

The proceeds of Ahmed Idris Wase’s corruption is can be seen from his recent purchases and social behaviour depicting a highly wealthy individual. Shortly after ascending to his present office, Wase acquired a world scale poultry farm in Bauchi State in a community called Tilden Fulani in Toro along the Bauchi/Jos road. The farmland is reported to be over 50hectares in size and valued at over N500million be conservative estimate. Remarkably, he failed to declare the asset in his asset declaration for the code of conduct bureau [CCB]. In addition, Ahmed Idris Wase acquired a palatial home located in Bauchi Government Reserved Area [GRA] generally referred to as the “Palace” valued at over N670million.

In Abuja, he recently acquired a property in Asokoro, a highbrow area of Abuja at 57 T. Y. Danjuma Street for the price of N4.8billion. it is located directly opposite children of Late Ado Bayero House. Also located in Asokoro is another house being erected for the deputy speaker under construction that can accommodate 300 people – located near the house belonging to the Hon. Minister of Transport, Rotimi Amaechi. Ahmed Idris Wase resides at his home is Gwaripa, Abuja and also owns a home in Basha, Wase in Plateau State.

See picture of Abuja property at 57 T Y Danjuma below: Striking to note is that the deputy speaker did not own any of these properties prior to becoming a lawmaker. In the words of a competent source close to the lawmaker, “before he became a member, he was wretched and begging for crumbs. He had neither a plot of land anywhere nor a house. The plot of land he built his personal house on at his home village of Bashar was commandeered from the Wase local government education authority. It’s a public property.”

The deputy speaker is auguring for the position of Speaker of the house of representative. He is presently lobbying heavily for the position – with monies exchanging hands. It behoves the leadership of bot the Executives, The Legislature and the Judiciary to help clampdown on this form of heartless corruption from festering further.

“At a certain parliamentary session he presided over, he expressed crass ignorance of the status of Nigerians in diaspora that brought disgrace to the entire federal constituency. He claims to be a graduate of Harvard university which Reuben Abati disapproved. He is half-educated with a diploma in engineering from College of Education, Pankshin in Plateau State.“

“It’s through the intervention of Tinubu he was awarded the deputy speaker position. The speaker and himself are all Tinubu loyalists.”