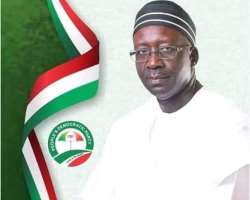 The most acceptable gubernatorial aspirant to Ebonyi electorate in the forthcoming 2023 general elections in Ebonyi State and Chairman of House of Representatives Committee on Reformatory Institutions, Rt. Hon. Anayo Peter Edwin-Nwoñu has congratulated the newly-inaugurated National Executive Council of Peoples Democratic Party, PDP, under the leadership of former President of the Nigerian Senate, Senator Iyorchia Ayu on its successful inauguration. Speaking to news men after the inauguration which held at the Abuja International Conference Centre, Edwin-Nwoñu who brimmed with joy equally expressed his confidence in the Ayu-led PDP NEC will do well in strengthening the rejuvenated party by playing by the rules and ensuring internal democracy in their administration.

According to Edwin-Nwoñu who represents Ezza North/Ishielu Federal Constituency in the National Assembly, "On behalf my constituents and teeming supporters in Ebonyi State, I heartily congratulate the National Chairman of the greatest party in sub-saharan Africa, PDP, former Senate President Iyorchia Ayu and other members of the PDP National Executive Council on their successful inauguration which flowed from their respective victories in the October 2021 PDP National Convention. "I have confidence in the experience and integrity of the National Chairman and the other great Nigerians who make up the newly inaugurated PDP NEC; and we know that they will play by the rules and especially strengthen the party by fostering internal democracy in their administration of our great party."

Rt. Hon. Anayo Peter Edwin-Nwoñu further pledged his support and cooperation as well as those of his constituents and supporters to the Ayu-led PDP NEC; assuring the new PDP leadership of intercessory prayers for God's guidance.

"I assure the brand new PDP National Chairman and his team of my support and cooperation; and that of my constituents and supporters in Ebonyi State. We shall always continue to pray that God guides them to lead the PDP successfully to victory to enable the party rescue our great country, Nigeria, from bad governance", he concluded.