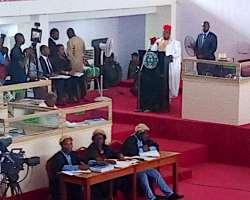 The Governor explained that the 46.65% increase of the 2022 budget over the 2021 revised budget is due to the carryover of a large part of the expected receipts in the fiscal year to the next fiscal year.

He noted that apart from statutory allocation, financing of the budget was expected to come from Federal Government bridging finance of Eighteen Billion, Two hundred and Twenty Five million, three hundred and thirty six thousand, one hundred and three naira, Ninety two kobo (18,225,336,103.92) given to each of the 36 States in Nigeria.

"This proportion of 61.73% capital to 38.27% recurrent (ratio of 1.6 to 1) is structured bearing in mind our determination to deepen our capital projects development especially completion of on going projects.

Gov Umahi further noted that his government would in 2022, focus more on empowerment, employment, education human capital development and infrastructure.

" We shall make effort to give more employment to our people from January 2022.

"Apart from the cash transfer, and the NG - Cares programme of the Federation , we are definitely going to pursue industrialization, empowerme t and setting up businesses for our children .

"The Empowerment process is on-going and it is going to get expanded next year but I am very much convinced that by January 2022 the first tranche of the empowerment will be given out.

"The first set of employment will also be given out.

"We have made a provision for payment of grautity especially from 2015 to 2021 and this will start in earnest.

"We also made under the 2022 budget , provision for the payment of all rentention funds for all contractors that completed their jobs.

"Let me mention that two new universities we want to start is a must and that is Aeronautical Engineering University and the University of ICT, Science and Technology.

" The Aeronautical Engineering University, subject to giving free land by Ezza nation, will be close to the Airport while the University of ICT, Science and Technology shall be sited in Izzi Local government" Umahi said.

He thanked the Assembly and executive council members, party leaders and stakeholders for their support to his administration quest to develop the state.

Earlier, while welcoming the Governor to the hallowed chambers, the Speaker, Francis Nwifuru, extolled the developmental strides of the Governor, which he hinged on prudent financial management and a cordial legislative - Executive relationship.

Nwifuru who commended the implementation of the 2021 budget by the Governor, encouraged him not to relent in delivering his campaign promises to the people.

The motion for the acceptance of the proposal for the deliberation of the House was moves by the House Leader, Victor Chukwu and seconded by Hon. Chukwuma Igwe, representing Onicha West state constituency.

The Budget later passed 1st and seconded reading at the floor of the house before adjournment of sitting to November 10.

Meanwhile, the speaker called on Min istries, Departments and Agencies to meet with the House budget committee for any issue concerning the budget before the next adjourned date.

He announced members of the committee to include House Leader, Victor chukwu.