FirstBank, Others Partner To Reposition Non-Oil Export For Economic Growth 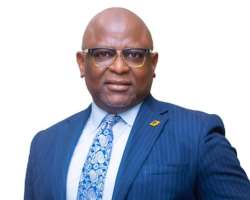 First Bank Nigeria Ltd. says it will leverage its vast experience in supporting trade businesses, especially SME to support Federal Government’s efforts to diversify revenue base of the economy.

By Itohan Abara-Laserian
First Bank Nigeria Ltd. says it will leverage its vast experience in supporting trade businesses, especially the SME to support the Federal Government’s efforts to diversify the revenue base of the economy.

The News Agency of Nigeria (NAN) reports that the webinar was titled; “Roadmap to Building Sustainable Non-Oil Export in Nigeria: Harnessing AfCFTA and Agro Commodities.”

Adeduntan noted that the bank would leverage its expertise to drive discussions that would enable existing exporters to expand their export businesses and also encourage new entrants into the non-oil export industry.

According to him, the non-oil sector holds tremendous value and opportunities for the country to enhance job and wealth creation, foreign exchange earnings and gross domestic product (GDP) growth.

He noted that the Africa Continental Free Trade Agreement (AfCFTA) presents an opportunity for Nigeria to be deliberate and position itself appropriately to become Africa’s export hub.

“This can be achieved considering our population, resources and economic size.

“At FirstBank, we have been at the front burner of driving economic growth and we will use our reach and connection to orchestrate growth in the non-oil sector,” he said.

Adeduntan said that to drive the goal, the bank had created an Export Desk to support the needs of exporters, including designing export products and solutions to cater for pre and post export financing and services.

Adedipe noted that the world that Nigeria operated pre COVID-19 pandemic was fast disappearing, stressing the need to give more attention to the country’s non-oil export industry.

According to him, there is need to build supporting infrastructure to aid export business, as deliberately done by China toward boosting economic growth.

He added that aggressive targets should be set and rigorous measures implemented.

“If Nigeria does not act, other countries will act on us,” he said.

Yakusak, represented by Mr Folorunsho Akintunde, Deputy Director, NEPC, said that through the plan an export policies for 22 major products that could generate 30 billion dollars annually was evolved.

According to him, the council is preparing and positioning SMEs for AfCFTA through various trainings, programmes and incentives.

He said that the NEPC was working closely with Afrexim Bank and ITC, to ensure that Nigeria was ready for AfCFTA, especially on the Export Trading Company.

Also, Comptroller Malanta Yusuf, Customs Area Controller, Apapa, advised exporters to familiarise themselves with items allowed to be exported and those on prohibited lists.

He also advised them on clear description of goods and proper packaging to facilitate acceptance of goods.

Intong said that to support AfCFTA, the bank would spend 40 billion dollars in intra-Africa trade and investment in the next five years.

He added that this was twice the amount disbursed for the same purpose in the last two years. (NAN)