Uwazurike, The Extortionist From Okwe Runs Amok Over Anambra Elections 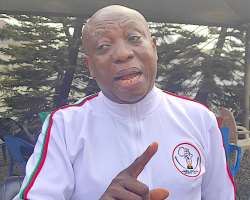 In a video clip credited to Ebeano TV, Chief Ralph Uwazurike, former charge and bail lawyer and extranged and disgraced leader of the Movement for the Actualization of the Sovereign State of Biafra (MASSOB) was seen ranting like a deranged dog over the outcome of the recently concluded Anambra Gubernatorial election won by candidate of All Progressives Grand Alliance (APGA), Prof Chukwuma Soludo.

The failed secessionist from Okwe, Imo State was so insensed in the video that he could not hide the fact that his pay master, Sen Andy Ubah lost woefully after spending so much to sway the election in his favour including the payment of the sum of N500million to Uwazurike to blackmail the current Governor of Anambra State, Chief Willie Obiano and his party, APGA. Unfortunately, Uwazurike could not deliver on the hatchet job due to the massive security and vigilance of ndi Anambra at the elections.

Uwazurike whose means of livelihood is fast running dry actually preyed on desperate Sen Ubah who thought he could swindle his way into Agu Awka but was dealt a massive rejection by Anambra electorates at the polls.

Even the feeble attempt by the Okwe born extortionist to weep-up sentiment over the senatorial ambition of the wife of late APGA Leader fell flat since he obviously knew next to nothing about the long forgotten adventure. Most insiders are well aware that the leadership of APGA and indeed Governor Obiano have along acquitted themselves creditably and honorably.

The public is therefore advised to ignore the video rant by shameless Uwazurike who would rather work for the enthronement of brigands rejected by ndi Anambra at the expense of APGA which has been delivering dividends of democracy to ndi Anambra. Sources revealed that some of the invading goons from neighbouring state were from the Uwazurike camp and he is yet to justify the funds made available to him for the nefarious activities targeted at influencing Anambra election infavour of his pay master.

Is anyone surprised like I am that Ralph Uwazurike is shamelessly campaigning for APC which incidentally had no candidate in the Anambra elections? Am I the only one surprised at what free money has done to reasoning of the extortionist from Okwe?