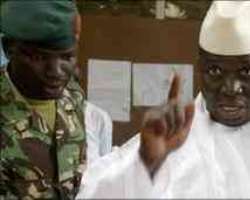 Yahya Jammeh came to power in a coup in 1994
A Gambian judge has sentenced eight men, including a former army chief, to death for their part in an alleged coup plot last year.

Judge Emmanuel Amadi said they were all guilty of treason but had leave to appeal within 30 days.

A correspondent in court told the BBC that relatives broke down in tears as the judgement was read out.

It is not the first time army officers have been accused of plotting against President Yahya Jammeh.

Mr Jammeh seized power in 1994 as a young army lieutenant and has won three widely criticised multiparty elections since then.

Related stories
Gambia charges over 'coup plot'
Country profile: The Gambia
The men were accused of procuring arms, ammunitions, equipment and mercenaries from Guinea to stage a coup.

“After going through the evidence of the prosecution and the defence, I find all the persons guilty and accordingly sentence them to death on all three counts,” Judge Emmanuel Amadi is quoted as saying by the AFP news agency.

Fabakary Ceesay from Gambia's Foroyaa newspaper told the BBC the alleged plotters were in court for sentencing.

Mr Ceesay says the men tried to comfort their relatives who began wailing as the verdict was announced.

According to AFP, the last time someone was executed in The Gambia was in 2007.

Several people were sentenced to long prison terms over the 2006 coup attempt.