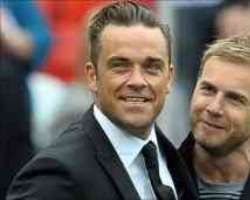 Take That meet up at a recording studio in London
Singer Robbie Williams and Take That have recorded a new album, the group has confirmed.

It is the first time all five members have worked together since Williams quit 15 years ago.

The singer said he was “embarrassingly excited” and reuniting with his former group felt like “coming home” while bandmate Mark Owen added that it “feels like a dream”.

All five singers have written the songs for the record, due out in November.

Owen said: “Getting the five of us to be in a room together, although always a dream, never actually seemed like becoming a reality.

Related stories
In pictures: Take That
Williams and Barlow record duet
“Now the reality of the five of us making a record together feels like a dream. It's been an absolute delight spending time with Rob again. But I'm still a better footballer.”

Jason Orange said it was “absolutely brilliant,” adding, “I'm over the moon that Robbie's back with us, however long it lasts. I just want to enjoy our time with him. Life is beautifully strange sometimes.”

Speculation began that they might reform when it emerged that Williams had met up with the rest of the group during Owen's stag do.

When Williams walked out of the band in 1995, he went on to launch a successful career. The remaining members disbanded a year later but reformed in 2005.

Since then, they have had three number one singles and two sell-out tours.

As a solo artist, Williams, who was presented with the outstanding contribution award at the Brits earlier this year, has had eight number one albums in the UK.

Williams and Barlow recently put the past behind them

Last month, he announced on his website that he was releasing a single with former bandmate Gary Barlow.

Shame, co-written by the pair, is due out on 4 October and will also appear on Williams' greatest hits album, In And Out Of Consciousness.

In a statement on his website, Williams said the album was “not only a celebration of my past but also a bridge to the future”.

“The fact that part of the future includes a name from my past makes it all the more poignant for me.”

The last album that the band worked on together was their number one record, Nobody Else in 1995.

Exclusive footage of the band back together will be shown on the BBC News at Six later.