Group Pressures APC Caretaker Chairman, Gov.Buni To Resign Or Be Forced Out 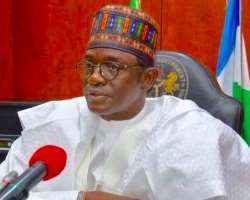 Concerned APC Stakeholders group has called on Yobe State Governor, Mai Mala Buni, the Chairman of the All Progressives Congress (APC) Caretaker Extraordi­nary Convention Planning Committee (CECPC), to re­sign Immediately or he would be forced to step down.

The group, led by one Ayo Oy­alowo, at a press conference in Abuja on Thursday, said the Buni-led Committee has “failed to deliver on its mandate, having conducted the worst ward, LGA and State congresses which they alleged has further divided and polarized the party” and therefore, he should resign.

The group also requested Presi­dent Muhammadu Buhari to activate relevant clauses in the party’s statutes to dis­solve the committee forth­with, noting that the CECPC has demonstrated a clear lack of direction to steer APC to desired success.

“While we note the exigency of the CECPC at the time it was set up as stopgap measure to address the prob­lem the party faced at the time, we regret that the Committee has outlived its usefulness, and created more problems than it aimed to solve.

“And as such, the Mai Mala Buni -led CECPC must resign or we will have no option but to force them out,” the group said.