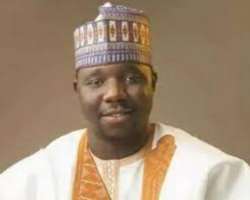 In continuation of the crisis rocking the Plateau State House of Assembly, the Speaker of the Legislature, Abok Ayuba, has now been whisked away from the assembly complex in a police Hilux van.

The operation to take Ayuba out of the complex was led by the Commissioner of Police in the state, Edward Egbuka, on Monday afternoon.

The News Agency of Nigeria (NAN) recalls that Ayuba was on Oct. 27 impeached by 8 members of the assembly and elected Yakubu Sanda as the new Speaker.

But Ayuba and members of the house loyal to him held a session outside the assembly complex same day during which they suspended six of the members that impeached him, and declared him (Ayuba) as the authentic speaker of the house.

Gov. Simon Lalong had recognised Sanda as the new speaker of the assembly.

However, Ayuba and the lawmakers loyal to him gained access to his office on Monday and were holding an executive session preparatory for a sitting when some youths staged a protest in front of the assembly complex in support of Ayuba.

Egbuka told journalists that they were going to another venue to continue with discussions they started in the speaker's office.

He said that they would address the press when the discussions were concluded.

Ayuba briefly told journalists that he did not know whether he was arrested or not.

The embattled speaker said that he would address journalists at the end of everything.

NAN reports that before the speaker was taken out of the assembly complex, the youths who were protesting in front of the complex in his support were dispersed by security personnel.