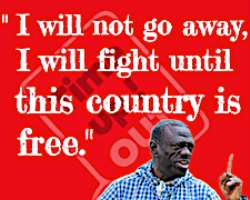 Opposition leaders under People's Front for Transition (PFT) need to reduce on talking about NUP and Kyagulanyi aka Bobi Wine, especially while on Facebook, unless it’s so necessary. They should instead mention more the names of the people they want to promote; they are working with or the PFT agenda. If NUP later sees sense and join them, that will be ok, but I wouldn’t hold my breath over it. The NUP leader intentionally creates controversy in order to keep himself in the headlines. If you feel you don’t want to promote him, find a nickname to call him on social media, something, like, “sleazebag “, “name- spoiler “, “Chameleon “, “liar “, ” Kiwanyi “(Fake), e.tc

Technologically speaking, Bobi benefits every time his name is mentioned somewhere on social media as it automatically increases his fame internationally, yet we aren’t really benefitting from him as a country. I’m probably his biggest promoter but some ignorant NUPs seem not to appreciate my free services.

When he takes a photo tying his wife’s shoelaces (as he recently did on Nubian's wedding) and it goes viral, he benefits a lot more than some politician doing something good for our country. Maybe, Uganda’s tourism experts could learn something from this free experience, and take advantage of it. To his credit, " sleazebag " knows how to market himself using sleazebag methods.

This is a simple marketing technique automatically designed by social media companies. Social media uses various algorithms to run in order to gauge the preferences of each user in order to allow marketers to target them with adverts to match their tastes and/or point them to other sites that might be of interest to them. It’s all very clever and runs entirely without human intervention.

As a light user with a very narrow field of registered interest, Facebook seems to think that I’m interested in anything concerning Uganda, UK or football. So, every now and then they would suggest Uganda celebrities pages, Uganda media, anything sporty or British.

From this I deduct that Facebook assumes that everybody they have little detail on wants this crap – so their algorithms and assumptions are not really that clever. But this benefits people craving for fame or marketing. That’s why during the 2020-21 campaigns, almost every African was forced to see a picture of Bobi Wine, thus, the mistaken belief that he’s among the most influential people in Africa. The world was made to think that we had a very intelligent person in our midst capable of removing Museveni from power, till when he was hosted on international TV channels and started talking. I remember the first time I saw him on CNN, I felt like slapping myself.

His followers aren’t as obtuse as people think. They would make you talk about their leader even when you are supposed to talk about something else. If you refuse to talk about him, atleast, they would insult you to force a reaction out of you. Be aware of their trickery. They know that he has got no useful policy or plan to sell, so they find a crazy but effective way to sell him.