You Are Kidding: Pdp Berates Umahi Over Threat To Seal Its Office In Ebonyi. 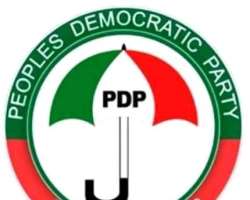 The Peoples Democratic Party in Ebonyi State has flayed Governor David Umahi over threats to seal its temporary office in the State.

Both the Peoples Democratic Party and the All Progressive Congress had scheduled their State Congresses tomorrow, Saturday, October 16, 2021.

Umahi during a meeting of the All Progressive Congress stakeholders held at the Ecumenical Centre, Abakaliki on Friday, had threatened to seal off the Party's temporary office over allegations that it has been chosen as a venue for alleged APC parallel State convention tomorrow.

Umahi alleged that one Festus Nwakparata had posted that he was coming to conduct a parallel congress for the APC, naming the PDP's temporary office as venue.

Umahi threatened that he would order, before tomorrow, the sealing of the office, a hotel facility belonging to the Senator representing Ebonyi Central Senatorial district, Chief Obinna Ogba, also a staunch PDP member.

In a reaction before journalists in his office, same day, the Acting PDP State Chairman, Chief Fred Udoogu described the allegation as both useless, baseless and unimaginable.

He maintained that the owner of the hotel who released part of it to the Party has remained a genuine, bonafide member of the Peoples Democratic Party, adding that it sounded ridiculous, the Governor's allegations that such a facility would be used for APC event.

Udeogu further explained that the APC and the PDP had never before, shared offices as each of the Parties had always drafted their programmes differently, in line with their timetables.

Udeogu said: "I can state categorically that the information you people have is as useless as it is unimaginable.

"Because as far as I know, the owner of this place is a genuine and bonafide member of the Peoples Democratic party, Ebonyi State, and is a distinguished Senator.

"We have different ways of playing this gane, politics, and it is not easy for even an APC man to come here and host something.

"Since I came into this place, November last year, I've never seen any APC person come here on daily basis, and I do not know what an APC person will be coming to do here."

He advised that the Governor should have done himself the favour of first confirming from the hotel's management whether such event was booked in the hotel before issuing his threats.

Udeogu alleged that the Governor has been looking for reasons to seal the hotel, and may have put up the "flimsy" and "directionless" allegation to perfect his intention.

He questioned why an adult like the Governor should be behaving like a child in the name of politics, and advised him to repent.

"We are both 58 years and we are all adults, and at that age one should be more responsible and not behave like children.

" How can somebody just stand up, attending his Party's congress and start being trivial, instead of concentrating on what you are doing, and out of want of what to say, to tell the World that you are going to seal somebody's business.

"I'm sorry to say that some people don't have advisers.

"I'm just appealing that the God of sincerity and justice should get into the leadership of this State."

Udeogu emphasized that all was set for the PDP's State convention tomorrow, adding that the Party had about a month ago sent their timetable and gotten approval from the Independent Electoral Commission, the Police and other security agencies.

He added that the Party, aware of the kind of politics played by the Governor in the State, had always avoided government facilities for their events, from the wards to State level, adding that neither them nor the Governor and his party should nose into the other's affairs.

In the same vein, the APC during its meeting has also harmonised activities and posts for its tomorrow's congress, assuring of hitch-free exercise.