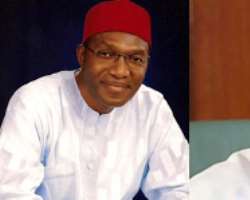 The last may not have been heard about the call for state of emergency in Anambra State by the Minister of Justice and Attorney General of the Federation, Abubakar Malami, SAN as backlash arising therefrom has pitched the dramatis personae in the grand scheme to capture Anambra at all cost for All Progressives Congress (APC) against each other.

Following Malami's pronouncement and the unexpected backlash Sen Andy Ubah who is aggling to sneak into Government House Awka as governor, and Governor Hope Uzodimma of Imo State against the Minister.

Reliable sources within the fold of the APC revealed that Andy Uba, Hope Uzodimma and Malami pannicked and have been on each others throat since the Governor of Anambra State, Chief Willie Obiano bust their bubble at State House Abuja after meeting with the President.

The source confirmed that Andy Uba called Uzodimma after Malami's faux pas to express his anger that the Minister has "messed-up their plans by letting the cat out of the bag early. On his part, Governor Uzodimma said that Malami misintepreted his role by making the emergency rule call at the wrong time when Obiano had audience with President Buhari and had the opportunity to make Malami look stupid.

However the Attorney General defended his pronouncement vehemently insisting that he is in order, and that he was unaware that Anambra State Governor was in Abuja to see the President and that he would have pulled the necessary strings to block him from having audience with Mr. President. He expressed surprise at the furor that his suggestions has generated and thereby putting him on the spot despite all the attempts to the plans in stages till the final stage of the plans for Anambra.

Meanwhile, Governor Uzodimma and Yahaya Bello of Kogi are threatening to withhold their investment on Andy as his chances of paying back is deeming by the day as the Anambra electorats are poised to reject anything APC not to mention a highly ill-prepared and unpopular candidate, Andy.