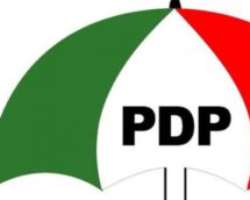 Nomination forms for the various offices in the National Working Committee, NWC, of the Peoples Democratic Party, PDP, will be on sale, Monday next week, convention planning organizing chairman, Ahmadu Fintiri has said. The Adamawa State governor stated this yesterday in Abuja after a meeting of the committee at the party's national headquarters.

This is even as he noted that the committee is planning with the October 30/31 dates in mind. According to him, the Eagles Square has been secured while the Old Parade Ground, Area 10 will serve for accreditation. He said, “We expect that sales of forms will commence on Monday and we also expect that the screening committee should also commence and conclude their work on or before the end of next week so that those who are vying, will go about and do their campaign. “The venue has been secured, that is the Eagle square and it is ours on that day, 30th and 31st. We have equally secured the Area 10 Old Parade Ground which will serve the purpose of accreditation.

“We are urging the accreditation committee to work on using these venues in liaison with the transport committee so that the transport committee will work with the appropriate transport companies to secure vehicles for members that will be accredited and conveyed from the Old Parade Ground to the Eagles square.” Governor Fintiri further said the committee would go the while distance to address the submissions of the various convention sub-committees in order to have a hitch-free exercise.

“We have received budgets from all the sub-committees and we are in the process of streamlining the budget because there are areas the submissions are conflicting. We are all working to achieve one convention which is the 2021 convention. “As soon as we finish this meeting, we shall approve the budgets based on the availability of funds and early next week, precisely Monday and Tuesday, some of the committees will start receiving their budgets support so that they can start their work in earnest for us to have a successful convention.

Also speaking, governor of Bauchi State, Senator Bala Mohammed told newsmen that consensus remains an option in all the positions, adding however that where that is not possible, contestants would head to the field to test their popularity. “Consensus is normally a process of democratic consultation because democracy is about consensus. Certainly, electoral process can be reduced by having a converging point on an individual and that would have reduced disparaging issues within the party.

“I did say we should have a consensus candidate, but where we will not, we will not practice imposition. “We have resolved the issue of zoning. We have learnt our mistakes and we are not going to play to the gallery the way and manner our detractors or competitors want us to be. “We will always resolve our issues, so zoning is over. We have really gone over this issue. What we are looking forward to is the emergence of a chairman from the North, who will give us the leadership that we require to form government in 2023,” he said.