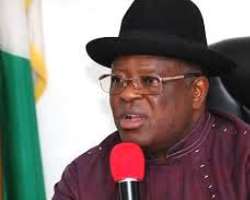 Members and supporters of the Peoples Democratic Party in Ebonyi State has been urged to keep their eyes on the happenings in the State as they work towards reclaiming their mandate, come 2023.

The Party's Acting State Chairman, Chief Fred Udeogu made the remarks in Abakaliki on Tuesday, while addressing journalists on the Party's local government congress.

Udeogu who claimed that 95 percent of appointees in Umahi's present APC government were still PDP members, maintained that PDP was the only authentic Party, not only in Ebonyi State, but in Nigeria.

Udeogu further maintained that as far as the fourth republic was concerned, the only existing political party was PDP, stressing that APC was not a political party but an amalgam of diverse aggrieved persons from diverse platforms, having no blueprint on how to govern the country.

He further criticized the poor leadership style of Governor Umahi whom he alleged has, among other things, ruined the State Civil service and other institutions in the State, depriving Civil Servants of decent wages, statutory allowances and gratuities.

He expressed optimism that the Party would takeover leadership to right the wrongs come 2023 general elections.

Udeogu emphasized: "And when you talk of APC, We don't know who is APC and who is not APC, because Ebonyi is PDP.

"People who thought it was better to go the other way, thinking the grass was greener, went and they saw that it was not.

"All of them came back, and we gave directive to our various wards to accommodate them.

"My encouragement to our true supporters is that in all things, they should continue to show interest in what is happening in Ebonyi State, including our people who are in government.

"About 95% of the people in government today are our people, and we urge them to continue to be steadfast.

" By God's grace, we will win."
On the Party's ongoing Congresses Udeogu maintained that in PDP, there were no preferred candidate as all contestants for any post must face elections or receive unanimous endorsement from the electorates to qualify for any leadership post.

He noted that the Congresses so far has been hitch-free as the Party has established understanding across all sections and its political players in the State.