THE GADFY AS POLITICAL 'MARADONA' 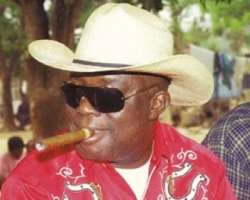 
Since the dispensation of democracy some 18 years ago, Charles Kofi Wayo, fondly called "Chuck" in Ghanaian political circles, brings laughter and humour to the political field anytime things look too tense. A cigar-puffing and American-cowboy-hat-wearing eccentric, Chuck is described variously as "one of Ghana’s most entertaining politicians," "an irascible political whiner," and an "impertinent saber-rattler." In a way, Chuck is Ghana’s political "maradona," during which in his political dribbling he leaves both opponents and allies puzzled, dirge and at the same time laughing.

His latest tirade that "parliament is useless, MPs are criminals" on Ghana’s Republic Day (July 1) sent the legislators scrambling about how to deal with him but after much invective and anger they decided to leave him alone and not make a hero out of him. Chuck wasn’t deterred and counter-attacked the parliamentarians as "jokers." Flamboyant and unrepentant, Chuck is known to associate himself with one of Ghana’s most depressing slums, Nima, a suburb in Accra, the capital. For this, he is also affectionately called "Nima Boy." But that’s contradictory, dismally poor people do not want to smell expensive cigar; they want food, water and shelter. That makes Chuck’s Nima base weak and just big talk since he hasn’t initiated any development programs at Nima to ease their material inadequacies.

A bulky man with chubby cheeks, Chuck will, on first encounter, strike you more as a well fed night club bouncer than a politician. He really has courage and speaks his mind without admission of guilt. This is evident in his fearlessness in taking on the Ghanaian establishment, unearthing its deficiencies to throw at their faces, and creating laughter all the way. No doubt, Chuck is not only the darling of the Ghanaian media but also a gold mine for local and international media cartoonists, gags and humourists.

In Chuck, the humourous side of Ghana’s democracy comes clearly alive - he once warned of a "civil war" if the then ruling National Patriotic Party (NPP) uses its parliamentarian majority to pass the Representation of the People’s (Amendment) Bill, which will allow diasporan Ghanaians to vote in future elections, into law. The bill was passed eventually and there hadn’t been any "civil war."

Sample: "The parliament itself is a useless place, the people there don’t need to be there, they don’t! They are criminals a lot of them in there…In a country where "we have no water to drink," no one has any right to buy Pajeros and Land Cruisers with tax payers’ money…Ghana continues to be governed by colonial rules that do not favour the masses but only the elite…" Despite such outbursts Chuck hasn’t initiated any legislative private bill to reform Ghana’s existing colonial laws that are unrealistic in today’s development process.

A former diasporan Ghanaian who was resident in the United States for almost 42 years, Chuck’s permanent return to Ghana during the dawn of multi-party democracy some 18 years ago has enliven the democratic system. His gadfly activities and political "maradona" schemes soundly demonstrate how healthy Ghana’s democracy is – Chuck has become the barometer of democratic vigour. This wouldn’t have been possible during the years of tyrannical military juntas and repressive one-party regimes.

His American accent makes him stand out in the hot Ghanaian political terrain. Chuck has almost dabbled in all the Ghanaian political parties and has equally being frustrated with their mechanisms. Three years ago, Chuck saw the then ruling NPP as "bad" and the main opposition National Democratic Party (NDC) as "greater evil." Today, he sees the new ruling NDC under President John Atta Mills "as the most hopeful around on the continent of Africa." That’s the political "maradona" at work, a political chameleon that changes its colours easily to suit his moods.

Clearly self-centered, though he sees himself as having been born into the NPP’s conservative capitalistic tradition, Chuck founded the United Renaissance Party recently, of which he is the presidential candidate, chief decision-maker, chief policy-maker, chief strategist, chief financier and director all wrapped into one. That’s the African Big Man syndrome gyrating in Chuck’s soul. Chuck appears more of a pragmatist than an ideologue, with an observer describing him as an "astute politician" and another as an "opportunist."

When the NPP came to power in 2000, Chuck had lobbied to either head the Energy Ministry or manage Ghana’s main oil processing plant, the Tema Oil Refinery. Rejected, angry and frustrated, Chuck not only left the NPP but criticized the then President John Kufuor’s regime and called Kufour a "con man." Chuck got his wish when the new Mills regime appointed him to the National Energy Commission Board.

A restless, complex and contradictory man, who sometimes talks before thinking, Chuck has taken on almost all known political players and policies he deemed unfruitful. He found the huge money spent on the celebration of Ghana’s 50th anniversary unnecessary in the face of deepening poverty. For this reason, some Ghanaian political watchers such as Moses Kofi Yahaya sees Chuck as "relentlessly projected himself as the sole wielder of the magic wand for Ghana’s problems besides demonstrating an unabashed penchant for blather. Wayo’s doomsday scenario, reckless and irresponsible as it seems, was [is] nothing more than the bombast of a sullen politician."

It is from such image that Chuck, in 2008, took on the heated debate then raging that Ghanaians are underdeveloped because of their "genes" and "Africans are stupid," because of the appalling way they handle their development process, and came to the conclusion that "Ghana is under-developed because the citizens don’t have commonsense."

Chuck doesn’t necessarily blame ordinary Ghanaians but their leaders, of which he is part. For Chuck, because Ghanaian leaders lack commonsense they haven’t been able to help Ghanaians acquire commonsense skills needed to drive their progress. He may be philosophically correct, but how is Ghana to correct this mistake and make its citizens have greater commonsense to progress? Chuck, who hasn’t won any elections or occupied any politically significant position but ironically described as "political maneuverer," botched as Ayawaso East parliamentary candidate in the 2000 general elections on the NPP ticket.

However, Chuck has big plans for his commonsense project. First, he will contest presidential elections under his newly minted United Renaissance Party. Second, he will surely win the presidential elections. Third, he becomes the President of Ghana. Fourth, he uses his presidency to mount Ghana on the "right path to development." And fifth, he will bigheartedly use his presidency to share "his stock of commonsense with the people."

Nice thoughts but the attempts to resolve Ghana’s developmental problems need a firm grasp of the challenges emanating from the schisms of the nation-state and the global system. Chuck, with little formal education, all jokes aside, has not established any resilience in his "renaissance" rants, not to talk of the flowering "African Renaissance" process. Still, Chuck could learn from the fact that for both historical and cultural reasons, Ghanaians’ so-called lack of commonsense, as he claims, comes from their elites’ inability to understand and know their nation-state well enough and appropriate their cultural norms in Ghana’s development process in addition to their ex-colonial neo-liberal heritage.

Narrowly, it is the elites’ weak commonsense (much of their thinking does not start from Ghanaian cultural standards unlike the Southeast Asians) that has undermined the commonsense of most Ghanaians. That’s why over 70 percent of Ghanaians in the informal socio-economic sector - where the bulk of Ghana’s wealth is located and entrapped - are not factored in when serious national development planning are being undertaken, making it appear Ghanaians have "no commonsense," that their developmental tribulations come from their "genes" and that "Ghanaians are not intelligent."

And that may be part of the reason why to Chuck "parliament itself is a useless place, the people there don’t need to be there, they don’t!" The people there need to be there, for they were voted there by Ghanaians. To Chuck, Ghanaian parliamentarians aren’t criminals but they will be better off if he can train them in his commonsense ideals to tackle development challenges.