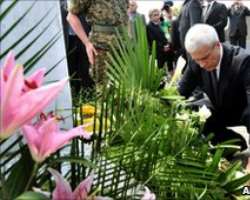 Barack Obama described the Srebrenica massacre as “a stain on our collective conscience” as hundreds of victims of the 1995 atrocity were buried.

In a statement read for him in the Bosnian town, the US president admitted the failure of the international community to protect the enclave, and said those responsible must be pursued.

More than 7,000 Muslim men and boys were killed by Bosnian Serb troops.

The massacre was the worst atrocity in Europe since the Second World War.

Hundreds of victims of the massacre were buried at a ceremony outside the town on Sunday.

The 775 coffins with the remains of newly identified victims from mass graves were laid to rest at the Potocari cemetery near Srebrenica.

European leaders and the presidents of all former Yugoslav republics who had gathered for the ceremony heard Mr Obama's words that “there can be no lasting peace without justice”.

Mr Obama urged “the prosecution and arrest of those that carried out the genocide”, and added: “This includes Ratko Mladic who presided over the killings and remains at large.”

Serbian President Boris Tadic attended the ceremony, in what was seen as a significant gesture.

For years Belgrade denied the scale of the slaughter, but in March Serbia's parliament passed a landmark resolution apologising for the massacre.

It said Belgrade should have done more to prevent the tragedy.

Mr Tadic repeated his government's vow to track down the fugitive general.

Speaking on Sunday, he said: “As the president of Serbia I will not give up the search for remaining culprits, and by this I first of all mean for Ratko Mladic.”

The former Bosnian Serb general has been in hiding for almost 15 years and is believed to be in Serbia.

Segregated town
He has been indicted by the International Criminal Tribunal for former Yugoslavia (ICTY) for genocide and crimes against humanity for his role in the grimmest episode in the break-up of Yugoslavia in the 1990s.

Srebrenica had been declared a UN safe zone, to which thousands of Bosnian Muslims (Bosniaks) had fled during the 1992-95 Bosnian war.

But the Bosnian Serb army easily overran the lightly-armed Dutch force there in July 1995.

The massacre is the only episode of the conflict to have been deemed a genocide by the UN tribunal.

Thousands of people attended the ceremony at the Potocari cemetery – the biggest Srebrenica funeral so far.

New rows have been made for the burial of 775 victims, who will join nearly 4,000 already there.

Mourners mingled among the coffins, looking for the names of loved ones.

Speaking at the commemoration, Bosnian Grand Mufti Mustafa Ceric called on European politicians to bring about the Bosnian Muslims' desire to have a “state in Europe that will protect us from the next genocide”.

Hasan and Suhra Mahic, both in their 80s, were finally burying their sons Fuad and Suad.

“I would have preferred that all of us have been killed together, then we would not have had to live through this,” Hasan told the AFP news agency.

Ramiza Gurdic was burying her son Mehrudin, alongside her husband and another son already in the cemetery.

But many Serbs in the region reject the established narrative of July 1995, the BBC's Mark Lowen in Srebrenica reports.

“The Serb people are portrayed in the media as committing genocide, but it isn't so,” Mladen Grujicic, who works for a local association helping the families of Serb victims of the war, told the BBC.

“No Serbs contest that a crime happened in Srebrenica, but they're insulted when the numbers are manipulated,” Mr Grujicic says, adding that Serb victims of the war have been forgotten.

Despite attempts to lay the past to rest, Srebrenica remains segregated 15 years after the tragic events, our correspondent says.