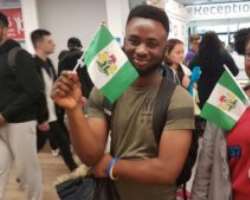 After more than 200 unsuccessful job applications on LinkedIn alone, Nigerian student Modupe Osunkoya knew time was running out for her to extend her stay in Belgium.

With three months left on her student visa, she either had to get a job or leave the country.

But there was another option – enrolling for her third post-graduate degree since leaving Nigeria in 2017.

“I never saw myself doing a PhD but if I go home now, there is no job waiting for me,” the 28-year-old told the BBC.

High unemployment – one in three young people are without work – and comparatively poor living conditions mean many of Nigeria’s brightest would rather take their chances abroad than return home.

So last year Ms Osunkoya enrolled for a doctorate degree in Estonia which is running concurrently with her second Master’s degree in Belgium.

She settled for Estonia after receiving no job or PhD offers in Belgium.

“The studies are [a] means to an end, and if God says the end is a permanent residency, why not?” she said.

Her PhD in Future Cities at the Tallinn University of Technology is a paid position. At the end of the four-year research she can apply for permanent residency.

She is planning to relocate to the eastern European country for the course, which like those in Belgium, is taught in English. University graduates have increasingly found it difficult to find work in Nigeria

Ms Osunkoya is just one of many Nigerian students from families who are not part of the super wealthy elite to study overseas.

Last year, around 100,000 Nigerians travelled abroad to study, according to ICEF Monitor, which focuses on international student mobility.

Many hope to become permanent residents of their host country, and take one step at a time to achieve their goal. Studying about Africa – in Belgium

Another Nigerian student in Belgium, Bonuola, who did not want her surname to be used, said: “People complete a Master’s degree, go back to do some advanced diploma below their academic level, then some cheap certificate, all in a bid to remain legal in the system.”

Despite getting a degree in economics in Nigeria, she decided to start from scratch when she arrived in Belgium, finishing a three-year course in business management – to buy herself time – and then proceeding to a two-year Master’s degree course in management.

She has not ruled out the possibility of a second Master’s degree and a PhD if she is unable to find work that will open the way for her to get a permanent visa.

“I am an African studying African studies in Belgium and it makes me mad,” said a third student, Ifeoma, (not her real name) who is currently doing her second Master’s degree since arriving in the country in 2019.

“I am not taking it seriously, just killing time [while I] decide on what to do,” she added. Belgium has a controversial history as a colonial power in Africa

Tuition fees as low as 1,000 euros ($1,200; £850) per year and the relatively low cost of living for students in Belgium, compared to some other European countries, have made it an attractive destination for many Nigerians from average-income backgrounds.

“Living expenses are low – you can get accommodation for 300 euros per month,” said Ms Osunkoya.

Like many others, she left home with only a semester of tuition fees paid and enough pocket money to last a few weeks. She financed her education by working up to 20 hours per week, as she is legally allowed to do, earning up to 1,000 euros per month.

But the preferred destination for students from financially better-off families is still English-speaking countries such as Canada, the UK and the US, where there are more than 13,000 Nigerian students. Canada preferred to UK

One reason for this fall was the removal of a visa that allowed foreign students to work for two years after finishing their studies.

That, along with cheaper tuition fees, less stressful visa processes, and clearer pathways to postgraduate work and residency, made Canada a more attractive destination for many students.

But the UK government has since reversed its policy, hoping to claw back its share of the lucrative global education market. Some students study in Nigeria before moving abroad to further their studies

Like most foreigners, Nigerian students typically pay more than three times the fees paid by UK students or those from EU countries.

But it can be hard for Nigerians to get white-collar jobs in the UK, and even more so in places like Belgium where language counts against them.

Flemish, French and German are Belgium’s official languages and most employers want candidates who can speak at least two of them.

Like most other Nigerian students, Ms Osunkoya is only proficient in English, although she has a basic knowledge of Flemish.

“Even if you have a post-study visa you will be competing for jobs with locals who speak the languages better than you,” she said.

Some students also complain of racial prejudice, while others say they have become over-qualified and yet have no work experience.

Last week, Belgium revised its immigration policy to allow students to stay for up to a year on their temporary visas to look for a job.

But Bonuola says she won’t be taking up the option, as once signed up for it, she would no longer be able to return to school for further degrees if she can’t find a job.

“It’s like being caught between a rock and a hard place,” she said