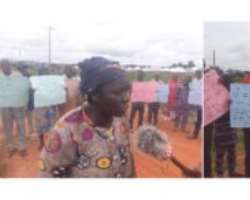 Some retirees, widows and orphans among others have protested against the decision of the Plateau State government to sell their plots of land at Kangachik, Zawan area of Jos South Local Government.

The protesters, who carried placards with different inscriptions on Saturday, appealed to Governor Simon Lalong to stop the plan which is ochestrated by the Ministry of Physical Planning and Urban Development to rob them of their lands.

They alleged that government is selling off their lands which they acquired while in active service. According to them, the previous administration in the state attempted taking over the lands forcefully but they challenged the decision and the case is still ongoing at the state High Court in Jos. Speaking to Journalists during the protest, Elder Pam Dung said that they legitimately acquired the lands and they have the documents to prove their ownership of the property. Dung said that they were surprised that the present administration has silently began the sale of the land to other people. (Saturday Telegraph)