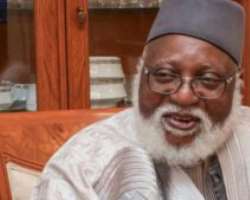 He stated this while playing host to the executives of the Nigeria Union of Journalists, Niger State at his Uphill residence, Minna, just as he expressed concern over the lingering security challenges bedevilling the country and he was however optimistic about the capacity of the security agencies to contain the situation.

The Elder Statesman thereby called on the media to help in diffusing the tension through balanced reporting coupled with the presentation of facts and truth at all times, highlighting, that journalists must not allow unscrupulous individuals in the society to use them to destabilise the country.

He pointed out that constructive criticism was essential for positive development, but should be garnished with solutions and way forward. While congratulating the new executives on their victory during the last election, Gen Abubakar admonished them to assiduously work towards enhancing fair and balanced reporting aimed at combating fake news. He welcomed the decision of the new leadership of the union to establish an electronic centre where newsmen can fact check stories before going to press and assured them of his cooperation and support.

The Council Chairman, Comrade Abu Nmodu had earlier informed the former military ruler that the executive members were in his residence to seek his fatherly advice and blessings and also to intimate him on some of their programmes and activities in the state. He said that the media in the state have a long history of responsible journalism and will maintain the existing cordial relationship between the media and the general public.

He solicited the support of the former head of state in the actualization of the programmes and development planning of the professional group. (Nigerian Tribune)