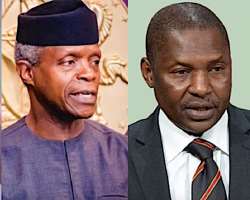 A chieftain of the New Nigeria Peoples Party (NNPP), Barrister Olusegun Bamgbose, has described rumoured plans by the ruling All Progressives Congress (APC) to field Vice President, Yemi Osinbajo and Attorney General of the Federation, Abubakar Malami, in the 2023 presidential race as a ploy to continue President Muhammadu Buhari’s tenure by proxy.

Bamgbose said this in a statement he signed on Saturday.

He stressed that although 2023 was time for a Christian President of southern extraction, Osinbajo was a wrong choice due to being linked with Buhari.

Bamgbose, who argued that Osinbajo’s incumbent position was being usurped by the “cabals” of Buhari’s administration, stated that the same persons would disallow the Professor to satisfy the yearnings of Nigerians if he became president.

He called on Nigerians to reject plans by the APC to extend Buhari’s tenure by any means.

Bamgbose said: “Osinbajo won’t be allowed to create any meaningful impact as President, and will always be remotely controlled by some cabals in the government and will always pay homage to Buhari and the cabals in anything he does.

“The one million naira question is if he could not perform as Vice President, how sure are we that he will perform as President when the same cabals will still be in the corridors of power?

“Nigerians must stand up to say no to this grand conspiracy to extend Buhari’s tenure by proxy and reject any form of third term for Buhari.”