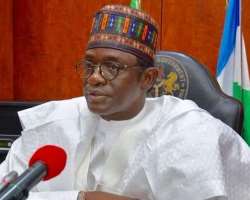 About 100 members of the All Progressives Congress (APC) have dragged the party to court over the caretaker committee led by Governor Mai Mala Buni of Yobe State.

They are seeking dissolution of the the committee on four grounds, and they are;

“That the 13 members Caretaker Committee falls short of the constitutionally required 24 members spread across not less than two-third of the 36 States and the FCT for any governing body of a political party, whether substantive or acting, as stipulated under Section 223(2)(b) of the 1999 Constitution (as altered).

“That the headship of the Caretaker Committee by a sitting Governor holding dual executive offices is prohibited by Section 183 of the 1999 Constitution and Article 17(4) of the APC Constitution, 2014 (as amended).

"That by Article 13(4)(xvi) of the APC Constitution, 2014 (as amended) only the National Working Committee rather than the NEC of the party can constitute a Caretaker Committee in whatever form, nature or guise.

“That the Attorney General of the Federation, Mr Abubakar Malami, SAN, who administered the oath of office on Gov. Mai Mala Buni of Yobe State as purported Caretaker Chairman lacks the powers to do so under any provision of the APC Constitution, 2014 (as amended) as he is neither a member of the National Working Committee or even a member of the NEC of the APC.”