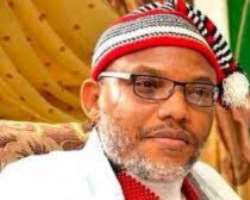 The group had urged Ndigbo to stay home to protest the arrest and detention of its leader Nnamdi Kanu.

It said the 6am to 6pm shutdown would be observed every Monday “until Kanu is freed”.

But there appears to be a division within IPOB as its leaders issued counter-directives yesterday.

Kanu's younger brother, Prince Emmanuel Kanu, in a statement, announced the cancellation of the directive.

He said it was in order not to disrupt the National Examination Council (NECO) examination for secondary school pupils.

The younger Kanu said a new date for the commencement of the sit-at-home would be announced.

“As a group fighting for the liberation of her people from oppression from her enemies, we realised that it would amount to assisting the said enemies to inflict more harm on our children if we do not suspend the sit-at-home order to allow Biafra students to take their exams,” he said.

But, IPOB, in a statement by its Head of Directorate, Chika Edoziem, said the planned “lockdown” of “Biafraland” will go on.

He said in a statement: “The Directorate of State of the Indigenous People of Biafra categorically and unequivocally state that our sit-at-home tomorrow (today) will go ahead as planned.

“Any information to the contrary must be ignored as the work of our detractors.”

IPOB's spokesman, Emma Powerful, added in another statement that the sit-at-home was not suspended.

“We wish to remind every Biafran that the sit at home order remains sacrosanct on Monday,” he said.

He urged residents to disregard any statement that did not emanate from him.

IPOB threatened that “anybody who ventures to come out tomorrow (today) will regret his or her life”.

In a circular to the heads of ministries and parastatals by the Head of Service, Harry Uduh, the government asked commissioners and permanent secretaries to monitor compliance.

He said the command, along with sister agencies, would ensure no harm would befall any citizen going about their business.

But some residents, who pleaded not to be named for safety reasons, said they would most likely comply.

A trader said: “I have my family to take care of. If I die now, who will take care of them?”

A government worker said it would be better to lose a month's salary than to lose his life when he was about to retire.

“No one will like to disobey the government directive, but it is a difficult situation for workers in Anambra,” he said.

He said: “This year's harvest season has just begun and farmers need the assistance of drivers to convey their farm crops to various markets…”

“We want to align ourselves with Ohanaeze Ndigbo and Governor Willie Obiano who had previously called on Ndigbo to disregard the sit-at-home exercise and go about their normal businesses as law-abiding citizens.”

Police talk tough in Imo
The Commissioner of Police in Imo State, Abutu Yaro, urged residents to ignore any such directive from “illegitimate persons and entities that parade the airwaves with falsehood”.

He urged residents to go about their normal business, adding: “It is from the various daily activities they put food on the table.”

He said anyone who enforces any illegal directive will be resisted by the people, backed by security agencies.

“You must not succumb to anarchistic illusions,” the police chief said.

Enugu government urged residents to ignore the directive, calling it “a familiar propaganda that has enthroned hardship on the citizenry”.

“There is no constituted authority, either as federal, state or local government, that declared any Monday as a resting or work-free day.

“We, therefore, ask all business operators within the capital territory to ignore the propaganda of a sit-at-home order as the state government has put machinery in place to ensure that lives and properties are secured.”

Special Assistant to Governor Dave Umahi on Media, Francis Nwaze, said in a statement: “The general public is urged to feel free to go about their lawful businesses in consonance with COVID-19 protocol… without any fear of intimidation or molestation, both on the said date and thereafter.”

Ebonyi State Police Command said it would ensure that nobody is forced to stay at home.

Commissioner of Police, Aliyu Garba, said: “People should go about their lawful business because nobody has the right to infringe on another's.”

Abia warns non-state actors
Abia Commissioner for Information, John Okiyi-Kalu, said in a statement that the state was in contact with the Kanu family and others involved in the case.

The statement reads in part: “The Abia State government is confident that the judiciary will ensure a free and manifestly fair trial for him and others as they remain innocent until proven guilty by a court of competent jurisdiction.

“We, therefore, wish to call on all citizens and visitors to continue to be law-abiding and avoid any activity that might lead to a breakdown of law and order.

“While the government will not compel anyone wishing to sit at home for any reason whatsoever not to do so as citizens have freedom of movement, we wish to strongly advise that nobody should also compel or enforce any-sit-at-home order from any non-state actor as doing so does not serve any known interests of the people of the state.

“Compelling our children to stay away from school can only serve the interests of the yet to be properly identified persons who may not want to see us make progress as a people.

“Similarly, our traders sitting at home at a time they need to work very hard to sustain their families and create wealth especially in this era of COVID-19 impacted global economy will not serve any development interest of our hardworking citizens.

“All law-abiding citizens and visitors are, therefore, called upon to go about their normal businesses without fear of molestation as adequate security has been provided to ensure their safety.

“Parents and guardians are also called upon to ensure that they monitor the activities of their children and wards with a view to ensuring that they do not engage in unlawful activities that will put them in harm's way.”

She said in a statement: “The Commissioner of Police, in conjunction with other security agencies, hereby reassures Abians and those within the state that their security and fundamental human rights are their top priority.

“The Commissioner of Police advises parents and guardians to warn their children and wards against participating in any act (including social media) capable of stirring action likely to cause a breach of the peace.”

'Sit-at-home will harm region's economy'
Some residents of Umuahia, the Abia capital and Aba, the commercial centre, expressed mixed feelings over the call.

A resident, Kelechi Okeke, said complying with the directive will not only demonstrate solidarity with Kanu, but it will also send a strong signal to the Federal Government that the Southeast is not happy with its continued marginalisation.

But, an Abia lawyer, Emperor Ogbonna, believes the sit-at-home would cripple the region's economy.

He said: “Monday is the most important day in Aba as that is the day entire West Africa comes to Aba to buy things.

“This money brought into Aba every Monday circulates to doctors, banks, lawyers, house owners, businessmen and women, etc all over Abia.

“Shutting down Aba every Monday until Nnamdi Kanu is released by the Federal Government will cause exceptional hardship on our land.

“I have lived in Abuja and I know that Abuja is not in any way bothered by what happens here. We are the ones that would be adversely affected by that sit-at-home order by IPOB.

“I am neither in support of the IPOB nor against them, but if the sit-at-home is necessary, then every Monday will be destructive to the economy of Abia State.

“Also, this would cause the Yorubas, Hausas, Togolese and other people who depend on Aba for the purchase of fabrics to look for an alternative. In the end, Abia and the Southeast will be the loser.

“How long shall we continue sitting at home? How long will the Monday sit at home last?… I think this is like scoring an own goal.”

The lawyer does not think the Monday lockdowns will result in Kanu being freed before his trial is concluded. (Courtesy, The Nation)