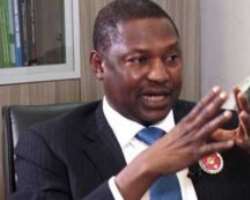 Backed by legal advice from the Attorney General of the Federation, Abubakar Malami, the All Progressives Congress (APC) Caretaker/ Extraordinary Convention Planning Committee (CECPC) has directed its members across the country to proceed with the scheduled ward congresses regardless of the fears raised by stakeholders of the party over the Supreme Court decision on Ondo gubernatorial election.

The party's leadership again on Friday reaffirmed that its position is unassailable, explaining that it has received valuable legal advice from the Office of the Attorney General of the Federation (OAGF)

Mamma Tahir, a member of the APC Caretaker Committee, stated this at a press conference held at the party's National Secretariat in Abuja. He said that despite the misgivings that arose as a result of the Supreme Court decision, that the party is on firm ground and will proceed with its programmes unperturbed.

“I am here this afternoon to reconfirm that our Congresses are on course to hold tomorrow and this Committee is working closely with the Attorney-General of the Federation and he has offered advice that we are on good ground and we are comfortable with that position.

“So our programmes will continue to roll on in the normal course of things. So we want to assure teeming members of the APC across the country to come out and elect officers at the ward level.

“This party believes so much in grassroots politics, grassroots democracy; that is the strength of the party. So we encourage all members to come out tomorrow and elect leaders of their choice at that level before we move to the next stage of our democratisation process and constitution of the leadership of the party,” Tahir stated.

On the fears raised by party stakeholders on the far-reaching implications of the Supreme Court decision as it affects the APC leadership, Mamman, a Senior Advocate of Nigeria (SAN), said it is not proper to begin to speculate what may or may not happen in the future.

“The business of the law is not about speculating what a court will decide in a particular dispute. We deal with what the court has presently decided on. That is the way the law operates. And people can have fear of anything.

“And whatever decision anybody takes, it will always be subject to litigations. People are free to test the propriety of any decision. You cannot stop anybody, no matter what it is. But we deal with the present at the moment,” he said.

He dismissed the reported threats of parallel Congresses in some states, saying that the openness of the process does not warrant such while admitting that some states have problems that the CECPC is trying to solve.

“The Caretaker Committee has been working very hard to ensure all the parties work together and remember the decision of the party is for consensus if possible. If there is no consensus, members will be free to go into an election. This party is not about imposing leadership on its members.

“So there is no reason for any parallel congresses at all because it is a plural system. If 10 people come out to contest for a particular position so be it. The voters; card-carrying members of the party will decide eventually who the members are,” he concluded.