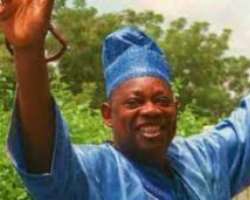 The children of the late business mogul and the acclaimed winner of the June 12 presidential election, Chief Moshood Kashimawo Abiola, have alleged that their lives are under threat over their father's properties.

Abdul, who spoke on behalf of the concerned Kudirat Abiola children, complained they were being denied their portion of the late MKO Abiola's assets.

Kudirat, one of the wives of Abiola, was assassinated whilst her husband was being detained by the Nigerian Government in 1996.

According to him, some of the properties also belonging to the late Kudirat Abiola were sold without her children's consent.

Among the properties in question, Abdul said, are about 400 hectares of land in Ayobo, a large expanse of land in Taraba, and RCN – a company.

He explained that the case had been taken to court but alleged that due process is being influenced.

He said, “They are using funds to manipulate the process, I have been told. Let the law take its cause without any influence from any side. I was almost arrested in Taraba State. I have the necessary documents. I should not be playing with the law and another person is influencing the process.

“I have been in Nigeria since 2007 and fighting these boys and they have been threatening our lives. Even in front of Zone 2 AIG, they threatened me. They said 'do you want to do fire-for-fire?' They believe everything belongs to them and they have not done anything with this property, which is the funny thing to me. You have not gone to the farm to farm, I want to farm and you are stopping me. So, where is the problem,” he asked.

In a chat, Abdul said many of his siblings are usually scared to return to Nigeria because their safety is not guaranteed.

“Some of my siblings won't even come back when they look at the stress that I am going through. They support me but keep asking me to be careful. I understand that Nigeria is not safe for anyone especially when you are fighting people that want to use all the money that belong to everybody from themselves,” he added.

Abdul, who is one of the children of Kudirat Abiola, said he was concerned about how family members and those who worked for his father will benefit from their labour.

He said, “Most of the family members are in support of all that we are doing. When I took over Concord, we have over 40 of our siblings from different mothers and send money to everyone, including the extended family. When we talk about the Abiola family, we are much.

“It includes people who worked with my father closely, those who worked with the concord press, farms and RCN that must be taken care of. Everybody should be a beneficiary no matter how little. That is why we did the open letter,” he stated.

In the open letter, the children urged the President, Major General Muhammadu Buhari (retd.), to order investigation into the alleged denial to their father's properties.

“We urge you to order an objective investigation and hope that we receive justice in this criminal matter. We know that the other party would also communicate with you and we look forward to that.

“However, we would urge them to commence their defense with the illegal insertion of names into the company carried out by them which is the genesis of this feud. Any other matter is more or less inconsequential as far as we are concerned.

“It has never been our wish to put family matters in public but we had involved the Oba of Lagos and the Alake of Egbaland years ago and our efforts were in vain. Even the late Baba Adini Alhaji Folawiyo had looked into the matter and was unable to resolve it. As a last resort, we approached your Minister of Justice years ago but once again they refused to cooperate.

“We strongly believe that it is time for criminal proceedings. Enough is enough!

“We have also decided to make it public to at least try to avoid the fate of our late mother who would have being turning 70 years old next month had some ruthless individuals not decided to assassinate her. We thereby urge you to inform all agencies not to be used to intimidate any of us while this investigation is being carried out,” part of the letter signed by