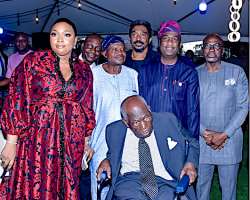 The Nigeria-Britain Association (N-BA) has held a reception in honour of its newly-elected President, Ms Abimbola Okoya, at the Association’s Presidential Cocktail held in collaboration with the British Deputy High Commission in Nigeria. The event took place in Lagos, on July 8, 2021.

This year’s Presidential Cocktail marked the first official event of the newly elected President and provided her the opportunity to share the vision and themed direction of the N-BA for the year with partners and friends of the Association. The Presidential Cocktail is a business reception for heads of prominent multinational and national businesses operating in Nigeria, including key government officials from both Nigeria and Britain.

In a welcome address, the British Deputy High Commissioner, Mr. Ben Llewellyn-Jones, expressed delight in the election of Okoya as the first Nigerian female and youngest President of the Association. He emphasised the importance of partnership and friendship in the relationship between both countries and lauded the resilience shown by Nigerians in the face of the challenges of the past one year.

“Those of us here in Nigeria and friends of Nigeria have seen the incredible resilience of Nigerians but also the importance of friendship and partnership that the Nigerian British Association shows and maintains. So, for my part and our part as the British Deputy High Commission here in Lagos, and for many British businesses and British representatives and friends of Britain here present, I will like to reaffirm our commitment to that partnership and indeed to what it means now and for the future,” he said. While giving a presentation on the vision of the N-BA themed, The Big I.D.E.A., Okoya expressed the Association’s commitment to further strengthen ties between Nigeria and Britain.

“The Nigeria-Britain Association is committed to the continued strengthening of ties between the Association and Britain in line with the collective vision of its founders to create an identity that reflects the bond of mutual understanding, cultural exchange and friendship between Nigerians, Britons and members of the Commonwealth and work towards a common good,” she said.

Speaking further, she said that the vision informed the theme of the 2021 event, namely The Big I.D.E.A., which is an acronym for Inclusivity, Diversity, Empowerment and Agility.

“This vision birthed the theme of the event - The Big I.D.E.A. – to ensure that no one is left behind. This year, the N-BA will be creating an ecosystem that embraces Inclusivity, Diversity, Empowerment and Agility in the delivery of set goals,” she added.

In his address, the Deputy Governor of Lagos State, Dr Femi Hamzat, extolled the N-BA’s vision, particularly its inclusivity objective, noting that it aligns with the Lagos State government’s inclusivity drive as evident in the appointment of more female permanent secretaries in the State civil service in the current administration.

While acknowledging the efforts of the newly elected N-BA President since assuming office, he praised the N-BA for fostering and strengthening the bond between Nigeria and Britain.

There were goodwill messages from various partner companies of the event, led by the British American Tobacco Nigeria (BATN). Delivering a message on behalf of the company, the Marketing Director, BATN West and Central Africa, Ademola Omitayo, felicitated with the N-BA and its new President, Okoya, whose election he proudly described as a landmark and a demonstration of the progressive values of the N-BA and its alignment with BATN’s core value of diversity. This he said has made the company come to be known as A Great Place to Work. Omitayo also used the occasion to share the progress of BATN’s transformation journey themed “A Better Tomorrow™”.

“We are proud to be a global leader in sustainability and are the only company in our industry to feature in the Dow Jones Sustainability Indices. We are currently strengthening our sustainability footprints in Nigeria and the communities where we operate,” Omitayo added.

Executive Director, Scib Insurance Nigeria, Mr Solanke Ogunlana, in his goodwill message, described the emergence of the N-BA’s first female Nigerian President as special and expressed delight in the positive initiatives of the Association.

In her goodwill message, the MD/CEO Eleganza Group, Mrs Folashade Okoya, expressed delight in the recognition given to the efforts of indigenous companies in the country by the N-BA, while felicitating with the Association’s new President.

She expressed confidence in the President having a successful tenure, owing to the fact that “She grew up in an industrial home where she was able to learn the spirit of hardwork and integrity as well as sharpen her business acumen at an early age.”