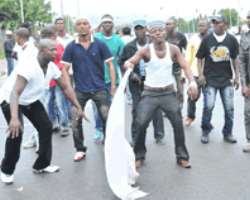 Ex-Militants
There might be no let-up yet on the fury of former militants in the Niger Delta, some of who stormed Abuja last Wednesday.

Over 1000 ex-militants had invaded the nation's capital city to protest their exclusion from the ongoing re-orientation and rehabilitation programme of the federal government in Obubra, Cross River State.

The protest took place few days after some of the aggrieved former militants stormed the Obubra camp and reportedly attacked the coordinator of the post-amnesty programme and Special Adviser to the President on Niger Delta, Mr Ndutimi Alaibe, at the Obubra camp.

Some of the aggrieved ex-militants, who spoke to Sunday Sun on the telephone, however warned that their next visit to Abuja would not be peaceful if the government failed to accede to their requests.

The warning is coming on the heels of the dismissal of the threat by the main militant group in the Niger Delta, Movement for the Emancipation of the Niger Delta (MEND), and prominent ex-warlords such as Ateke Tom and Eris Paul (aka Ogunboss). Indeed, the former militant leaders warned the federal government not to register the protesters in the post-amnesty programme as they were thugs hired to discredit the scheme.

They also fingered some elements in the North and in the Niger Delta as being responsible for the present confusion in the programme.

Sunday Sun investigation, however, revealed that the protest would have been bloody as some of them were actually armed. Some of their leaders were said to have prevailed on them not to use the weapons in their possession. Banks and some government offices were reportedly targeted during the protest.

Justifying their march on Abuja, one of the leaders, who gave his name as Etekwele I, told Sunday Sun in a telephone interview that some of the boys were determined to 'strike Abuja' but that they were prevailed upon to sheathe their swords.

Asked how this would have been possible after surrendering their weapons to the Amnesty Committee, Etekwele, who claimed to lead over 800 boys in his Urhobo camp in Delta State, boasted: 'That is a small thing for us. Getting tools (weapons) is no big deal and if we wanted we would have attacked some places in Abuja during the protest. I prevailed on my boys not to because it was not part of the agenda for now.

'But let the government know that next time would not be easy.

This is not a joke. We need jobs because we do not want to be idle again. Most of the boys have children and they must feed their families. That is why we want the government to know we have not been documented.'

MEND, in an electronic mail response to Sunday Sun enquiry, however described the protesters as 'shameless and hired thugs.'

Spokesperson of the militant group, Jomo Gbomo, said: 'The protest is an embarrassment to any able-bodied man who is neither disabled nor destitute. That men can shamelessly go on the streets to legitimize collecting handouts every month in exchange for their birthright is unfortunate. 'Those protesters are obviously hired thugs. These miscreants have seen their friends who claimed to be ex-militants receive monthly bribes and want to jump on board with the post-amnesty fraud.'

The group, however, refused to comment on claims that the protesters were sponsored by some elements in the North and on whether it would continue to insist on armed struggle to press home its demand for fiscal federalism. MEND and its leader, Henry Okah, are not part of the post-amnesty programme and the group continues to demand for control of the land and its resources by the Niger Delta people.

Regardless, MEND said it was not bothered about its exclusion from the programme, saying at the appropriate time the government would beckon to the group. 'We are doing nothing but believe that at the right time the Aaron team (MEND's negotiators) will be sought after,' Gbomo stated.

Leader of the Niger Delta Volunteer Force (NDVF), Chief Ateke Tom, in his reaction, also berated the protesters just as he expressed shock that they allegedly left Bayelsa State in a convoy to Abuja without being intercepted by security agencies.

In a statement made available to Sunday Sun, the repentant warlord said 'genuine Niger Delta freedom fighters' had embraced the presidential amnesty granted by the late President Umaru Yar'Adua.

'For the avoidance of doubt, let me emphatically state that the persons who thronged Abuja on Wednesday, July 8, 2010, were not ex-militants but youths sponsored by politicians to wage a political war of sorts against Chief Timi Alaibe, the Special Adviser to the President on Niger Delta.

'Some of us are aware of concerted efforts by certain highly placed persons in some states in the Niger Delta to sabotage the amnesty programme. How else can one explain the ease with which hundreds of misguided youths, who were probably armed, were allowed to travel in convoy of luxury buses all the way from Bayelsa State to Abuja? Who funded the trip? How come the so-called ex-militants who protested in Abuja were drawn from only Bayelsa?' Ateke said.

He called on President Goodluck Jonathan to institute a probe into the circumstances that led to the Abuja invasion.

Conspiracy theory
Sunday Sun investigation further revealed that some of the former militant leaders met in Yenagoa and concluded that unnamed Northern politicians in cahoots with a notable Ijaw youth leader from Delta State and some members of the previous amnesty committee were behind the protest. A source among the ex-militant leaders said they resolved to back the amnesty committee so that it would succeed. According to him, the leaders were aware that some people were not happy with what the amnesty committee is doing and want to frustrate it.

'It is not hidden that some persons who were in the first amnesty committee are working with some people to frustrate the intention of the Federal Government. Their grievance was that they were relieved of their duties. Indications point to the fact that there are blacklegs from the former amnesty committee, who are now inciting the boys in the camp and using various elements in the Niger Delta to see how they can cause trouble. But the ex-militant leaders are going to ensure their plan fail,' the source said.

The former insurgents, it was learnt, resolved at the meeting to speak up otherwise forces bent on frustrating the amnesty exercise would have their way and they (ex-militant leaders) would be at the receiving end.

In a brief interview in Yenagoa, Victor Ebikabowei Ben (aka Boyloaf) distanced the ex-militants leaders from the protesters.

Trouble looms
Also, spokesman of the Niger Delta Vigilante Force, Kiakoro Dimo, who was delegated by Eris Paul (aka Ogunboss) to talk to Sunday Sun, demanded the immediate arrest of the protesters, warning that any attempt by the Federal Government to register them could spell doom for the entire post-amnesty exercise.

He also claimed that some people wanted to frustrate the post-amnesty exercise and are using all kinds of tactics.

'When we came out as militants, there was a stipulated time that we agreed with the Federal Government. As I talk to you, people like Tompolo, Ateke Tom, Farah Dagogo, Boyloaf, Ogunboss, Africa, and Joshua all collectively came and surrendered arms within the time frame and worked to ensure that we do not fail to meet the deadline. We know those who are militants. It is surprising that militancy has become a money-making venture. When we were in the creeks, we were labeled as criminals, and we know the number of boys in each leader's camp.

'It is sad that some people would give their children hunting guns and tell them to go and claim they are militants and register. Look, there are laws in this country and we have to respect them. Where were those so-called militants who went to Abuja to protest when the amnesty deadline had not expired? Where are they from? Who are their leaders? If they are militants, where were they when we were going to Abuja to negotiate how we can drop our arms?

This is a sad situation because the Federal Government must not glorify criminality.

'When we surrendered arms, it was not just guns that we brought but automatic rifles. If the government is not careful and say they would register people, we don't know their leaders. If they just go to Abuja to claim they are ex-militants, then there would be problem in Niger Delta because some of us are annoyed. We want to say that there is no way government can register them. If they register them, there would be serious problem,' Dimo fumed.

He alleged that the boys were recruited from Bayelsa and Delta states by a prominent Ijaw youth leader, who he claimed was working with some subversive elements in the North and aggrieved former members of the amnesty committee, with the intention of causing confusion.

According to him, the protesters should be arrested and prosecuted.

'Is it not suspicious that something like this could happen when issues are being amicably resolved? We are calling on the government to apprehend them. The authorities of the country should stop this madness. They should be arrested, prosecuted and jailed for going contrary to the amnesty agreement. They are damaging our image.

'We won't be here and watch them derail the amnesty exercise. Government should not toy with the amnesty programme. It should stop the attitude of some politicians coming from the North, former members of the amnesty committee and a prominent Ijaw youth to hire boys from Bayelsa and Delta and cause confusion in Abuja. Government should bring them to book. If they don't bring them to book and go ahead to register them, then there would be problem,' Dimo further warned.