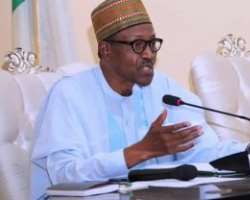 Twitter has deleted President Muhammadu Buhari's tweet wherein he threatened to treat Nigerians “misbehaving” in “the language they understand”.

In the tweet shared on Tuesday, Buhari spoke about the civil war experience and threatened to deal with those “bent on destroying” Nigeria through “insurrection.”

“Those of us in the fields for 30 months, who went through the war, will treat them in the language they understand,” he had said.Advertisement

WILL BUHARI BE SUSPENDED FROM TWITTER?
It is not immediately clear if the platform will take further action against the president.

He had posted the message while warning those “misbehaving in certain parts of the country”, particularly in the south-east where government infrastructures have been under attack.

Many Nigerians tackled him over the statement, citing his reference to the civil war — in which millions of Nigerians mostly the Igbo were killed — as a threat to commit human rights violations.Advertisement

They argued the president's tweet “expresses intentions of self-harm or suicide”, as stated on Twitter's usage policy.

Twitter did not provide further details on the action, but it said in its policy referenced that when it takes such measure, it is sometimes because “the behaviour violates the Twitter rules.”

Twitter Rules prohibit a number of actions from users, including violence, abuse and hateful conduct.

They provide that users may not: “Threaten violence against an individual or a group of people; engage in the targeted harassment of someone, or incite other people to do so; nor promote violence against, threaten, or harass other people on the basis of race, ethnicity, national origin, caste, sexual orientation, gender, gender identity, religious affiliation, age. The Cable