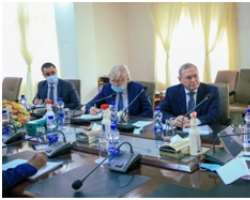 The Government of the Federal Democratic Republic of Ethiopia has expressed, emphasized absolute readiness, a progressive step, to host the forthcoming second Russia-Africa Summit scheduled for 2022.

This was the outcome of the consultative discussion held on April 22 between H.E. Demeke Mekonnen, Deputy Prime Minister and Foreign Minister of Ethiopia and H.E. Mr. Oleg Ozerov, Ambassador-at-Large, and Head of the Secretariat of Russia-Africa Partnership Forum (RAPF), as part of the preparations for the second Russia-Africa Summit planned to take place inside Africa.

Within the framework of the joint declaration adopted in Sochi, the Ministry of Foreign Affairs of the Russian Federation created the Secretariat of Russia-Africa Partnership Forum.

The Secretariat's primary task is to coordinate efforts for promoting cooperation between Russian and African business associations, ensure political and diplomatic support for projects carried out by Russia's state-run and private companies in Africa, and coordinating aspects of preparations for future Russia-Africa summits.

Mr. Ozerov gave briefing about the tasks and responsibilities of his office, the creation of Association of Economic Cooperation with the African States, which will bring major Russian and African companies to work together. As part of the preparation for the Summit, further consultations are being held with African Union and African countries.

Taking his turn during the diplomatic discussion, Mr. Mekonnen expressed his Government's readiness and acceptance to hold the Summit after Mr. Ozerov submitted an official request to host the Russia-Africa Summit in Addis Ababa, according to the official information posted to the ministry's website.

Generally recognized fact that Addis Ababa, Ethiopian capital, has all the facilities for large-scale international conferences and easily accessible with effectively built first class Ethiopian Airlines network to and from many African countries.

In addition, the African Union (AU), headquartered in Addis Ababa, has a gifted modern building financed by the Government of the People's Republic of China (PRC). African government representatives work here.

Mr. Demeke further told the Secretariat about Ethiopia's commitment to strengthen the long-standing relations with Russia, highly appreciated the initiative of Russia to establish the platforms to address a wide range of development issues and to exchange ideas on various significant aspects of cooperation, especially in the areas of security, innovation/technology, agriculture, energy, nuclear medicine, geology exploration et cetera.

In particular, both noted that the historic first Summit «gave a strong impetus for further development of friendly relationships between Russia and countries of the African continent». As expected, the next Summit will also focus on enhancing constructive cooperation and advancing integration processes within the framework of the African Union and a number of sub-regional structures.

Prime Minister Abiy Ahmed participated in the first Russia-Africa Summit, where a number of bilateral and multinational agreements were signed and a joint declaration was made, was held in October 2019 in Sochi, Russia. On the other side, H.E. Mr. Oleg Ozerov also presented an invitation of Foreign Minister Sergey Lavrov to H.E. Mr. Demeke Mekonnen to make a follow-up visit Moscow, Russia.