22 Years Of Nigeria's Democratic Governance: The Struggles Of The Past, The Agonies Of The Present And A Glimpse Into The Future 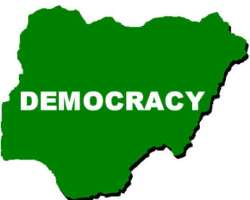 The current year 2021 is both symbolic and historic. Apart from the fact that it signals the commencement of a new decade, it is also important in two separate dimensions which are in the form of epoch celebrations in the national space.

One is the celebration of the nation's 22nd year anniversary of democratic governance after several decades of military incursion in matters of governance and politics which would be marked in a couple of days and the other being the 61st anniversary of the nation's independence from the hands of British colonialists after years of slavery and servitude. This to be celebrated in the month of October.

While both events are historic and are worth celebrating, I would rather focus this article on the first as I personally believe it houses the fulcrum on which the second rests. This not minding the fact that the second has a longer year span. Thus, the article will seek to focus on the yesteryears, the present and the future.

Nothing good comes easy is a popular maxim that has been infused ino our mental consciousness severally. Not even in matters relating to governance. This was the case of Nigeria's democracy.

In tracing the various circumstances that culminated into democracy and democratic governance in Nigeria, one cannot but give credence to several military administrators such as Yakuba Gowon and the likes who through various coup and counter coup invaded the political atmosphere of the entity christened Nigeria on the false premise that the civilian rule had been been roughshod and therefore needed a rebranding.

From the late 1970s, which was shortly after Nigeria gained independence until the late 1990s, the political terrain of Nigeria was marked by violence and uprisings which were the consequences of military invasion into politics.

Like a pendulum swinging back and forth, the entire nation went through crucibles. Issues such as the humiliation of press freedom and human rights were utilized by the military administrators as mechanisms for governance and to sustain the pace and tempo of their rule.

One cannot pay homage to the likes of Dele Giwaand other well meaning personalities who served as martyrs for the cause of the gospel of democracy. Their efforts coupled with letters, petitions and requests inter alia assisted the country in returning to democracy in 1999, after decades of brutal and oppressive reign. This was marked by widespread jubilations and hopes for a better tomorrow.

From 1999 up till the present time, democracy in Nigeria had been a journey on hills and valleys. This mainly as a result of the various regimes that had been elected. Closely tied to this is the necessity of understanding the establishment and activities of the various political parties that have assisted in shaping the fabric of Nigeria's political journey.

The inability of the nation's democracy to stabilise and run on a progressive cause has nosedived into several prognosis, theories and political catharsisand agonies. The emancipation for freedom from tyranny, dictatorship, continue to flow back and forth and break out ceaselessly like a ruptured blood vessel. What more can we say then about the demands for restructuring, or of secession and break away and more recently of overthrowing the current government?

For both the clergy and the laity, the commoners and the lords, the chiefs and servants, it is evident thatdemocracy and its adjunct principles of equity, fairness, respect for the sanctity of the human rights and life, rule of law, supremacy of the constitutionhave all been eroded and washed away into the sea of forgetfulness even in trifle matters as infinitesimal as administration of vaccines to cure maladies. Or how best do explain giving the best dose to the elites, while the lower echelon take junks?

Messengers and preachers of the stern gospel of real democracy as elucidated by Abraham Lincoln are now labeled prisoners of conscience. You may need to ask the likes of Deji Adeyanju, Agba Jalingo.

Are we back to the era of Adolf Hitler of Germany or of Idi Amin of Uganda? I am even forced to ask if there is an upgrade with respect to democracy as the system of governance.

Apparently saddened by the status of things and events, the Nobel laureate in literature, Professor Wole Soyinka had aptly described Nigeria's democracy as one thriving in the garden of impunity. Could this be termed an illusion or a reality?

To further, affirm Soyinka's assertion, Dele Momodu, an ace media professional and former Presidential contestant in his recent 61st Birthday Gift which was an epistle, had noted that Nigeria's case at present was one that had arrived at Golgotha. I wasbemused initially when I read through the letter. But doubting and disputing his analysis would tantamount to engaging in needless show of ignorance and folly.

Custodians of the law have turned out to be mercenaries of violence that are ever ready to unleash mayhem and disrupt the peaceful waters of the state. You may need to ask the nation's military on foot (the Nigerian Army) for the unforgettable role they played in the last end SARS protests which rocked the entire nation and which resulted into the death of the nation's future stars as well as denting our national image globally.

The dividends of democracy - equity, Justice,fairness, etc, which is what all citizen not mindingage or social status desire to enjoy seems to be amirage. Each regime continues to harp on this desireof the populace by promising to adhere to the dictates of the rule of law and democracy.

However, their promises continue to hit the rock. Lasisi Olagunju's recent edition of Monday lines which was published in the Nigerian Tribune on 17th May 2021 opens up with an the story of KingDionysius which describes why every regime turns out to be worse than the former. This I believe is the causative factor why the dividends of democracy many seek to enjoy may not materialise. Even after two decades, many are still waiting to eat the fruits of the mammoth tree that was planted.

Democracy in the modern parlance seems to be more of theory than practical. Efforts thus far such as the 2014 national confab have proved abortive. The best surgeon may even find it difficult to diagnose the myriad of challenges besetting our collective existence as a nation, ot even a soothsayer or the next bishop or imam.

Ask Reverend Father Mbaka on how he prophesied goodies for the entire citizenry and coming forth shortly to declare his prophecies as null and void.

You will need to ask the Amnesty International Group, the Human Rights Watch, Transparency International and the Social Economic Rights and Accountability Project (SERAP) for their efforts in championing the cause of good governance and strict adherence to the principles of the rule of lawand the extent to which it had worked.

With all these staring us in the face, we all need to ask ourselves the sincere question: "WHAT DOES THE FUTURE HAS IN STOCK"? Can we assuredly expect a bright tomorrow as relayed by Mary Bowley in her hymn " ALL WILL BE WELL?

Emily Dickinson's, ‘The Future Never Spoke’ seems to aptly capture the futile quest to predict the future of Nigeria based on current happenings.

"The Future never spoke –
Nor will he like the Dumb
Reveal by sign – a Syllable
Of His Profound To Come "
We have lost our first love, the oath of allegiance we swore to the goddess of democracy on the 29th of May, 1999 has been broken. Little wonder she has released her venomous poison making our blood vessels to be ruptured and break out with putrefying sores.

We all need do what the Biblical Elijah did by repairing the broken altar and mend the torn bridges. The god of democracy is gracious. She will pardon our folly and neglect have mercy on both the present and future generations and restore the years the cankerworm has eaten and the caterpillar has destroyed.

If we fail to do this, the future appears to be bleakand scary, filled with many doubts and troubles. God forbid that. But what if it happens, where do we hide our heads? Should we continue to give ourselves the false hope that the future looks bright?