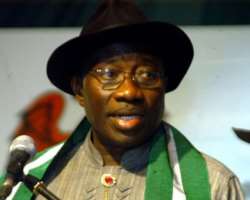 
ABUJA, July 08, (THEWILL) - President Goodluck Jonathan has apparently caved-in to public pressure to rethink the allocation of the whopping N16 billion naira for the celebration of Nigeria's 50th independence anniversary as he slashed the budget to N6.9 billion. The directive was contained in a letter he sent to the National Assembly today.

However, he said recent information from the Nigerian National Petroleum Corporation (NNPC) indicates that oil production for the 2010 fiscal year is likely to average at about 2.2 million barrels per day, as opposed to the 2.25 million barrels per day assumption made in the last revision to the revenue framework.

"Accordingly, I seek your cooperation in revising the revenue framework to be based on assumptions for oil production of 2.2 million barrels per day and an oil price benchmark of US$60 per barrel. This revision will imply aggregate revenue for the Federal Government Budget of N2.392 trillion naira, and a deficit of about N1.829 trillion naira (or 5.6percent of GDP), based on the proposed amendment budget's level of expenditure."

"This substitution is as a result of reprioritization of capital projects by the State House, the Nigerian Air Force, the Intelligence Community, and the Ministries of Army, the Nigeria Aviation, Health, the Federal Capital Territory, and Foreign Affairs.

"There are also slight amendments to the Consolidated Revenue Fund charges as well as the automatic adjustment to statutory transfers based on the revised revenue framework", he said.