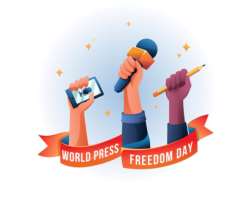 As the world marks World Press Freedom Day today, being May 3, it is not an exaggeration to say that most Nigerian Journalists are operating more or less like public relations officers as they gather stories more from Press Releases than from investigated stories. The reason for their resort to working like public relations officers cannot be farfetched when seen from the perspective of the fact that they are always afraid that when they stick to the real issues, they may not remain in the profession; they will definitely be in danger by doing so.

There is no denying the fact that the Nigerian Journalists are not free to do their jobs. In most cases, they really have the information; having done investigations, have every facts pertaining to a particular story, but then they sit on it as the publisher of the medium they work for and the almighty editor may have their own perspective to the story. In most cases, their own perspective is to appease the powers that be as no one set up a media organization to make losses through litigations that would be emanating from libels.

If the story relates to a “powerful politician” or government appointee or a rather a minister, as recently witnessed in the case of Isa Ali Pantami, Minister of Communications and Digital Economy who was alleged to have as a young Islamic lecturer in the 2000s made inflammatory comments in support of the extremist ideologies of terror groups such as Al-Qaeda and Taliban.

Besides having the nerve to publish “strong stories”, Nigerians have by each passing political dispensation witnessed Journalists covering elections detained and harassed by security services or other armed individuals, denied access to report on polling stations, forced to delete photographs, and assaulted.

It would not be forgotten in a hurry how a Photo-journalist, Benedict Uwalaka, who worked for Leadership newspaper was in 2012 attacked on the grounds of Lagos State University Teaching Hospital (LASUTH) whilst he sought to cover the release of the remains of plane crash victims to their families. It would be recalled that four assailants beat him with bottles, sticks, and their fists as he tried to photograph vehicles that were parked on the grounds of the teaching hospital blocking access to the mortuary. As gathered from news reports and video footage of the incident, Uwalaka suffered serious injuries on his face. Not only that, it was alleged by his employers that his assailants, who were identified as attendants of the hospital mortuary, also stole his mobile phones, camera, and 100,000 naira.

There is no denying the fact that Journalists, particularly those designated as Reporters during the EndSARS Protests came under unprecedented callous attacks while trying to cover the deadly protests that gripped Nigeria in October, last year.

As gathered during the protest that lasted for days, not few stakeholders in the media industry were concerned about how Journalists were harassed by security agents and how the media houses they work for were targeted by arsonists.

For instance, arsons attacked Television Continental (TVC) and also assaulted some security personnel attached to Channels Television that led to the temporary halting of broadcasts by the stations.

Notably, within the same period, Toyin Yusuf, a journalist with Osun State Broadcasting Corporation, and another member of the Nigerian Union of Journalists were attacked by some angry youths whilst covering the protests in the state.

In the same vein, Arise TV crew was prevented from carrying out their legitimate duty at the Lekki Toll Gate, Lagos, by a group of soldiers, precisely on October 21, 2020 during the period under review in this context.

At this juncture, it is expedient to say that this piece was inspired by the need to appeal to Nigerians to always allow the Journalists to do their jobs on daily basis without let or hindrance. Simply put, they should leave the Journalist alone. This appeal could not have come at a better time than now as the world marks Press Freedom Day which is annually observed on May 3 to inform the international community that freedom of the press and freedom of expression are fundamental human rights. It is a day chosen to remind people that many journalists brave death or face jail to bring daily news to the public.

It is a day that gives people the chance to pay tribute to media professionals who risked or lost their lives in the line of duty. Many communities, organizations, and individuals take part in this day through various events such as art exhibitions, dinners featuring keynote speakers, and awards nights to honor those who risked their lives to bring news to the world. We should not be oblivious of the fact that Freedom of expression is a foundation for many other rights

To encapsulate the advantage of press freedom in this context, it is enough to say that free press helps inform the public, and under a democratic dispensation informed voters, and makes such democracy stronger, and entrenched fairer elections even as it makes truth to be discovered. Besides, it should not be forgotten that an independent press can hold powerful interests to account.

Meanwhile, as Nigerian Journalists join the world today in marking press freedom day, those that have been frustrating them in the course of duties should have it at the back of their minds that in places where freedom of expression is not respected that the Journalist is faced with the choice of self-censor or put himself or herself at risk. Again, when the media cannot accurately tell the whole story, it is impossible to achieve balanced, high quality journalism.