Esn And Ipob Should Defend Themselves If Attacked - Former Aviation Minister 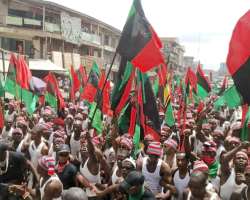 Amaechi said IPOB’s ESN should defend themselves if they are attacked while going about their activities in the Southeast.

The nationalist, however, cautioned both IPOB and ESN to steer clear of violence in the Southeast.

Amaechi, in a statement, accused security agents of igniting insecurity in the Southeast.

The elder statesman suggested that security agents may be igniting insecurity in the region to tarnish the image of IPOB and ESN.

“I will advise IPOB to steer clear of what is happening in the South East and let the truth be revealed. Let them maintain the sanctity of their innocence. If the ESN people are attacked, let them defend themselves. I don’t want IPOB to go into violence because they have neither the arms nor the wherewithal and capability to do that.

“Who is investigating these attacks? The Police is investigating the IPOB. Can the police investigate the government or themselves? What is happening now is like what Hitler did against the Jews, sent their secret service men to commit certain crimes and got back to accuse the Jews.

“I believe they are sending them to commit these attacks and burning of properties so that the impression will be that IPOB is behind it in order for them to either kill them or declare a state of emergency in Igbo land or to do whatever they like or completely kill the Igbo the way they like,” Amaechi’s statement read.

There has been series of violence in the Southeast as unknown arsonists have been attacking both private properties and government institutions.

Gunmen have also attacked some police formations in the Southeast.

Uzodinma had disclosed that the attack had political undertone.