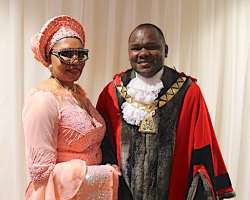 The Brent Council and the Mayor of London Borough of Brent, London, His Worshipful, Councillor, Ernest Ezeajughi has presented a recognition award to the wife of Governor of Anambra State, Dr (Mrs) Ebelechukwu Obiano (Osodieme) for her excellent work and contributions in creating awareness and support for people living with sickle cell anemia and other disabilities, through her charity organization, Caring Family Enhancement Initiative (CAFE).

His Worshipful, Counsellor Ezeajughi presented the Certificate to Osodieme on 24th April 2021 at the Governor's country home, Aguleri. At the presentation, the Mayor of Brent commended Osodieme for being steadfast in her commitment to charity and for using the instrumentality of her NGO to bring medical and emotional solace to those living with the Sickle cell as well as children suffering from congenital mouth disorders of cleft lip and cleft palate. He also thanked Governor's wife for her dedication and collaboration with the Council as one his official partners during his tenure, and urged her to sustain her humanitarian programmes.

The Governor's wife was flanked by her husband, Chief Willie Obiano, the Bishop of Catholic Diocese of Ado Ekiti, Most Reverend Felix Femi Ajakaye and the traditional ruler of Onitsha, HRM Igwe Alfred Achebe,when she received the award. Responding, Osodieme recalled the pain of losing her adopted daughter to circle cell disease years ago, abd explained that the experience gave her the courage to work for the welfare and wellbeing of persons living Sickle cell.

"My involvement in awareness creation about the dangers of the circle cell extends advocacy to advising intending couples to go for mandatory genotype test before marriage, as well as support for Persons Living Sickle cell disorder." She emphasized Osodieme thanked the Brent Council and the Mayor of Brent Borough for partnering with her CAFE since 2019, noting that the relationship has achieved huge results. She also thanked her husband, Governor Obiano for supporting her dedication to humanitarian causes, and urged other men to supports their wives to fulfill their dreams, arguing that such encouragement would propel them to greater heights. It would be recalled that Mrs Obiano was a Special Guest of Honor during the Brent Mayor's Making Ceremony on Wednesday 1st May 2019. At the event, CAFE was adopted as one of the official NGO partners of Mayor Ernest Ezeajughi.