The Stand Of Christian Association Of Nigeria Billiri L.g.a Chapter On The Recent Maitangle Stool Scandal And Ugly Act Of Some Hoodlum 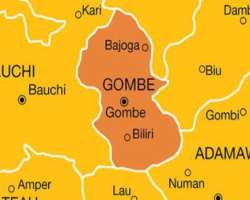 Better Late than never, the CAN Billiri L.G.A. Chapter wish to unfold and make public clarification on the recent Mai Tangle stool tussle, which is the true voice of Christians in Billiri L.G.A.

C.A.N Billiri LGA want to use this medium to commend the effort of the state chapter of CAN for their show of love, concern and effort made so far to see that Mai Tangle stool scandal does not head to any heinous act by the subjects.

CAN Billiri also commend the Gombe state government for its prompt action by deploying the security personnel’s before and after the heinous act. The Mai Tangle stool is not expressly or impliedly attach to Christian or Muslim faith but is purely concentrated for traditional worship of Tangale people. Hence the non-affiliation of CAN, that beliefs in the teachings of Jesus Christ but not tradition and customs of Tangale people. It’s against this backdrop, that CAN Billiri Chapter publicly disassociate itself with the statements credited to its former Chairman Rev. Joseph John during the Gombe state governor’s visit to Billiri on 20th Febuary,2021. The statement that “the Governor should forgive us for what we did and I urge the Governor to permit us meet the Chief Imam and his people to apologies” the Christian community in Billiri LGA are not part of this statements because of the following reasons:

·CAN Billiri Chapter have never met to agree that it was the Christians in Billiri that carried out such heinous act.

·Holy Bible teaches Christians Peace and pure Love not violence or retaliation. Jesus teaches us to Love our enemy and do good to them.

·Similarly, CAN Billiri Chapter has disclaimed the presentation made by Rev. Joseph John during Governors visit to Billiri that only Muslim were affected by the incidence which was not correct, Christians were also affected, Christian shops were burned, and properties in Gada-uku church were destroyed while three Christians lost their lives.

·CAN Billiri chapter wish to inform the public, that Christianity does not encourage violence nor breaking down of Law and order since Jesus throughout his life was not involved in any form of violence nor war with any group of people. Rev. Joseph John only presented his personal opinion to the Governor of Gombe state but not on behalf of CAN Billiri Chapter. We have carried out some findings on the ugly act, the immediate and remote cause was purely non-religious but man-made competition on who will occupy the stool of Mai Tangle with the use of available influence within each person’s reach.

·CAN observed the following and forward same to the authorities, groups, and persons

As follows:
(a) Government should investigate who set the motion of provocation that led to this heinous act by hoodlums in order to bring them to book.

(b) CAN Billiri chapter did not trust the sources of the information used by security in arresting the suspects, as it is only the Christians that are arrested on the daily basis we therefore demand for the process/sources of collecting names, security is a business of every Nigerian but not for some selected individuals, or else innocent people would be affected.

(c) we want to draw the attention of the Muslim lawyers from interfering in a non-religious scandal for this will promote disunity and lead to another breakdown of Law and peace. Anything that is not religious, let them use NBA which is a Neutral body to respond to issues of public importance.

Lastly, the Bible teaches us to rejoice with those who are rejoicing and to mourn with those who are mourning. CAN Billiri Chapter commiserate with the Muslim ummah for the burning of Mosques and for the Loss of lives and properties. It also commiserates with both Christians and Muslims, that lost their Loved ones. May their soul rest in perfect peace and may the Lord Jesus Christ replenish what they have lost in a Hundred fold.