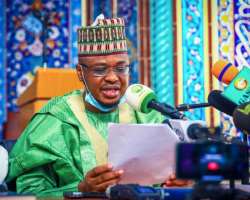 Reports last week said Pantami had been placed on the watchlist of the United States of America over alleged link with the leadership of terrorist group operating in the North East, Boko Haram.

In spite of the issue of the Minister of Communication and Digital Economy, Dr. Isa Pantami’s alleged previous link with terrorists gaining currency in the media, Information and Culture Minister Lai Mohammed said on Wednesday that the Federal Executive Council (FEC) meeting did not discuss it.

“I’m not going to go into the issue of whether government is comfortable or not. I will answer your questioned directly. It was not discussed at the council meeting,” he told State House correspondents in Abuja.

The minister, who briefed them on the outcome of the council meeting, presided over by President Muhammadu Buhari, reiterated that the matter did not come up for discussion at the meeting.

Pantami was not physically present at the meeting but attended virtually from his office.

Reports had last week said Pantami had been placed on the watchlist of the United States of America over alleged link with the leadership of terrorist group operating in the North East, Boko Haram.

According to the report, Pantami had ties with Abu Quata­da al Falasimi and other Al-Qaeda leaders whom he revered and spoke highly of.

His accusers also claimed that the minister was a close confidant of the late Mohammed Yusuf, the late leader of Boko Haram.

However, Pantami has since dismissed the report, describing it as fake, adding that he has been involved in various debates that preached against insurgency.

Pantami had said: “For 15 years, I have moved round the country while educating people about the dangers of terrorism. I have traveled to Katsina, Gombe, Borno, Kano states and Difa in Niger Republic to preach against terrorism.

“I have engaged those with Boko Haram ideologies in different places. I have been writing pamphlets in Hausa, English and Arabic. I have managed to bring back several young persons who have derailed from the right path.

“Some of the comments I made some years ago that are generating controversies now were based on my understanding of religious issues at the time, and I have changed several positions taken in the past based on new evidence and maturity.

“I started preaching when I was 13, many scholars and individuals did not understand some of international events and therefore took some positions based on their understanding, some have come to change their positions later.”