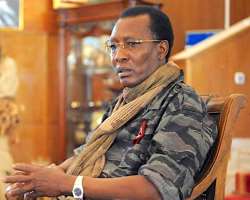 Almost a year former Chad's President Idriss Deby joined the fight against Boko Haram in Nigeria's border of Borno, he was reportedly killed on April 20 2021, while on the frontline against rebels in the north of his country.

Deby ruled his country for more than 30 years. He was regarded as an important personnel and ally for the West in the fight against Islamist militants in Africa.

It has been reported that Deby's son, Mahamat Kaka, would lead the country in the interim capacity as president.

The transitional council of military officers, spokesman Azem Bermendao Agouna made this known in a broadcast on state television.

Regarded as a gallant soldier, Deby died at 68, years after he came to power in a rebellion.

He would be greatly missed by all even though he was a dictator but he survived numerous coup attempts and rebellions.