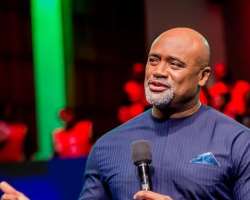 In any sane society practising and observing the principles of the rule of law, it is the responsibility of every individual residing in that society to be able to hold the machinery of the state (government) accountable to fulfilling it's promises.

Social criticism, challenging the excesses of the government, dragging the government and its adjunct components to law courts are some out of the many roles citizens of a nation play in nation building. In fact, citizens are the building blocks or the wheels of progress which a society runs. It is therefore necessary to note that a government that detests social criticism conversely detests national progress and development.

Currently, the Nigerian citizen is frustrated with the status of things and events in the polity. The constant display of protests are evidences of hopelessness, frustrations, large scale poverty and the likes.

The above may have been one of the many reasons, Pastor Paul Adefarasin of the House of the Rock Ministries recently shook the entire nation to its roots when he referred to Nigeria as a scam built on a faulty foundation. Apparently disheartened by the situation of things, the highly revered cleric had observed that Nigeria's problem were the nation itself and not her citizens.

I took my time time to digest the contents of the cleric's message. At this point in time it is essential to note that a nation does not love in space. It is made up of component parts of which the citizens plays a pivotal role.

Further to the above is the necessity of understanding the fact that Nigeria is not only a phrase, a collection of letters or an abstract word. In clear terms, Nigeria is it's people. Nigerians make up Nigerian. Nigeria is a synecdoche, that is used to refer to its inhabitants and not only a location that can be traceable on the world map.

Based on this, if Nigeria operates on a faulty foundation, then the citizens take the lion share of the consequences and the blame. After all, a car cannot drive it self except it is controlled.

While I must align with the fact that Adefarasin's verbal assertions emanate from a sense of love for one's country, notwithstanding, it can be faulted based on moral and ethical grounds.

Whether as an act of commission or omission, we (a collective name for the Nigerian populace) have all assisted in one way or the other in exacerbating the myriad of problems and challenges confronting Nigeria. We cannot claim ignorance of this or refute this claim as there are several instances that abound to prove this.

If Nigeria is to be referred to a scam operating on a faulty foundation, then it is: because of its citizens who in the wake of elections mortgage their future and conscience in exchange for trifle amount of money or resources which cannot last a lifetime.

As a result of some of its citizens who by virtue of the goddess of opportunity are placed in high positions and who continue to make unwholesome laws which affect national development.

It is because of religious leaders who continue to exhibit attitudes and characteristics which are despicable to religious tenets.

It is because of law enforcement agents who rather than securing the lives and properties of its citizens prefer to engage in shooting spree ay the slightest provocation. Or what could you think to be the rationale for the last October end SARS protests?

What more can we say about service providers who tax the populace heavily and fail to provide the services as and when due? Who own and manage these organizations if not people who have the blood of Nigeria running in their veins?

Simple practises such as obeying traffic rules seem a puzzle and yet we say Nigeria is a scam if an accident occurs.

What about the market woman who shortchanges her customers? And yet we blame the government for our woes.

What about citizens who engage in despicable practices such as drug trafficking, money laundering abroad and who continue to give bad names to the country?

Don't tell me you don't about the popular Abbas Ramoni a.k.a hushpuppi or of thr famous invictus who have been in the police net abroad for financial !mismanagement?

What about the latest report by the United Arab Emirates indicting the erstwhile chief of army staff, Yusuf Tukur Buratai and other ace Nigerians of buying choicest properties in the country?

Does this makes sense at all? Time would fail to permit of other instances which prove the fact that the problems that beset our country are caused by us. This is to fulfill the popular Yoruba adage that "kokoro to nje efo, abe efo ni ngbe". That is, the pests destroying the vegetables reside under the vegetables".

We are the products of our own doings or undoings. We are eating the fruit of our own hands. Why then do we at the slightest moment spue out the fact that Nigeria is a scam? Nigeria is bad, Nigeria isn't worth living for, talk more of dying for?

Yes, we blame Nigeria for the ridiculous condition of things, for the poor road infrastructure, for the fallen standard of education and the likes. Yet we fail to acknowledge the fact that Nigeria cannot be separated from its citizens. Nigeria is a synecdoche that is used to represent both the land, the government, the laws and the people.

Rather than continue to engage in the above, we should all channel our focus to mapping out solutions and rebuilding the faulty foundation. We should seek out our first love that had been lost and do the first works which entails putting the interest of the nation above other things.

Our failure to do this will continue to be our achilles heel overtime making us make the conclusion that Nigeria is a scam.