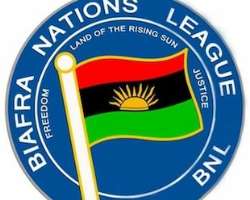 Biafra Nations League, BNL, today in Bakassi Peninsula welcomed the decision of major oil companies to quit from the Nigerian Gulf of Guinea. BNL said that it is pleased on hearing that Shell, ExxonMobil, Total, Chevron and Eni have decided to leave.

A statement jointly signed by the National Leader of BNL, Princewill C Richard, Deputy National Leader, Ebuta Akor Takon, Chief of Staff, Linus Essien and, Head of Operations, Henry Edet in Bakassi Peninsula today, the group urged the companies to leave as fast as possible, insisting that Nigeria does not deserve anything good coming from the oil companies operations in the Gulf of Guinea.

Recall that BNL had earlier given the oil firms quit notice to evacuate from the Bakassi Peninsula which is the operational base of group or face violence actions. The BNL also insists on pulling down Cameroon billboards and flags and replace them with the Biafran flags in the region.