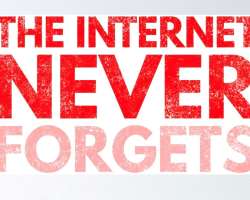 It is not an exaggeration to say that media platforms that were at different times launched on the virtual space were fun places to share photos, jokes, frustrations, thoughts, and milestones. There was the conviction that whatever was posted on anyone’s online profile or timeline was only distributed to friends, family, and those contacts with whom such person choses to share them with. Regrettably, as social media evolves, and continue to permeate all aspects of our personal and professional lives, it has become glaring that what anyone post online can have serious and lasting consequences.

For instance, in 2017, President Buhari's Personal Assistant on Social Media, Lauretta Onochie’s photos while she was protesting against fuel subsidy during former President Goodluck Ebele Jonathan’s administration went viral online few days after she challenged Tuface and others that planned a peaceful protest against Buhari's policies.

In a similar vein, the All Progressives Congress (APC) at the dawn of 2015 said former President Goodluck Jonathan bears a huge moral responsibility that will haunt him for a long time to come for deliberately allowing the Boko Haram insurgency to fester, leading to the deaths of over 15,000 Nigerians and the displacement of over 3 million others in six years. The politically inspired and partisan comment was contained in a statement issued in London by Lai Mohammed at the time, even as the party also hailed the military for the successes it recorded in the battle against Boko Haram at the time, saying the string of victories confirms the party’s stand that the Nigerian military can hold its own anywhere and anytime, if provided with the necessary equipment and if the morale of the troops is not undermined. Without resort to being biased in this context, can Lai Mohammed who was then the party’s spokesman, and now the minister of information and culture tell Nigerians the same thing about the ongoing government and its fight against the Boko Haram in the last 6 years? The foregoing exemplifies how the internet humbles people because it never forgets.

At this juncture, it is expedient to say that Nigerian actor turned politician, Desmond Elliot, will hardly forget what he passed through after a video that showed him condemning the use of social media by influencers, celebrities and the youths surfaced online. He was accused of pushing for a bill to censor social media speech as he reportedly blamed the shooting of peaceful protesters at Lekki toll gate on rabble-rousing comments made by social media influencers and celebrities.

There is no denying the fact that not few computer scientists will concur with this writer in his view that they might have in the past or recently being approached by politicians who are desirous of cleaning up their digital footprints. The foregoing guesstimation cannot in any way be pooh-poohed as users of the internet, including this writer, are by each passing day scratching their heads over suggestions on how to manage their ‘digital footprints’.

It is expedient to say that cleaning up digital footprint is expedient because whenever one visit a website, or post something on social media, or someone posts something about you, you literarily leave behind digital traces. This data, which includes your IP address, your usernames and passwords, and other identifying information, forms a digital trail, or footprint, that advertisers and cybercriminals can use to target you.

To protect your private information and your online reputation, you need to learn what your digital footprint says about you and what you can do to ensure it remains an asset, not an embarrassment. To this end, it is not false to say that not cleaning up one’s digital footprint has landed most politicians, and even top businessmen into trouble.

Until the end of the 20th century, most people could take one thing for granted: their embarrassing behavior would eventually be forgotten. It might be their predilection to anyone on skirt, or it might be getting drunk and throwing up at social events, but in an analog era, even if the faux pas were documented in a photograph, the likelihood of its being reproduced and widely circulated for years was minimal. The same holds true for stupid or offensive remarks. Once secondary school education was completed, there was no reason to assume that embarrassing moments from the school years would ever resurface any longer.

But alas! In this digital age, there is every reason for people to be circumspect about what they say or do in public; even right from secondary school as students. The reason for the foregoing cannot be farfetched as what one naively did in the past is bound to resurface in future, particularly when such person occupies a higher position or aspires for a lofty position; either in politics or in the corporate world. Thanks to the internet.

Unlike in the days of analogue when internet technology had not emerged, people now enter the corporate world or politics with the fear that the behavior or mannerisms they exhibited in childhood and adolescence would one day be brought to public domain for scrutiny, and thus begin to haunt them. But as past identities and mistakes become stickier, it’s not just individuals who might suffer. Something much larger would also suffer as the potential for social change and transformation, may also be at risk.

It is disappointing to note that not few people have had their careers or ambitions in politics, sports, entertainment and their likes truncated as the posts they made on social media in the past or what they said or did in the past came back in this age of internet to haunt them.

There is no denying the fact that most people do not know that what happens on the internet, or finds its presence on the virtual space will always stay on the internet, particularly as they do not think twice before making inappropriate posts on Facebook, Twitter, Linkedin and Instagram among other platforms. While seeking wide publicity, most people even go to the extent of seeking the services of Youtubers or political opinion writers to postreportorial, editorial and pictorial materials that are informational about their activities on social media, and ensure they go viral while monitoring the number of Comments, Like and Share they attracted.

Ignorantly as it seems, most people think they are just talking to accepted friends on the social media platform they are subscribed to when in reality they are talking or rather socializing with the whole world.

Gone are the days when social media platforms are simply used to interact with close and distant friends. Outlets like Facebook, Twitter, Snapchat and Instagram are used by most people that can in this context be dubbed “Unfriendly friends”. I won’t forget days that heralded the last Gubernatorial election in Edo State as it gave me an insight to the view being expressed at this juncture. A kinsman even commented on one of the article I posted online, specifically Facebook thus: “I don’t like reading this man’s article”. His comment, to be frank, conveyed an aura of hatred, animosity and jealousy. He no doubt represents the kind of people most of us called “Friends” on Facebook. They know everything about you as you keep on posting, commenting and sharing materials that were directly or indirectly from you. They would remain as “Friends” as long as you remain active on social media platform. They will never for once like, comment or share anything that comes from you but they are ironically your friends on social media.

Sometimes, when we are on social media platforms, we forget that by one click of a button, we are blasting out our thoughts to the entire world. One person that is at the moment learning the hard way is the Communications Minister, Isa Pantami who has been under fire since the clips of some of the lectures he delivered over a decade ago resurfaced online. Some of the lectures showed he was sympathetic to extremist sects like Al-Qaeda and Taliban, and expectedly the clips quickly caught online frenzy as many Nigerians demanded that he resigns. Others tore into the minister asking him to clarify the statements or at the least renounce them if truly his opinion has evolved.

However, while responding to questions during his daily Ramadan lecture at Anoor Mosque in Abuja on Saturday, the minister, an Islamic cleric, said his position on the subject has since changed, Daily Trust reported. He noted that his position on the subject was based on the information he had at the time, some of which were the consensus opinion among clerics in northern Nigeria at the dawn of the faceoff between the West and some Islamic countries in the early mid-2000s.

“Some of the comments I made some years ago that are generating controversies now were based on my understanding of religious issues at the time, and I have changed several positions taken in the past based on new evidence and maturity,” Daily Trust quoted him as saying.

“I was young when I made some of the comments; I was in university, some of the comments were made when I was a teenager. I started preaching when I was 13, many scholars and individuals did not understand some of international events and therefore took some positions based on their understanding, some have come to change their positions later.” To my view, I think we should begin to forgive ourselves over comments we naively made years back but which in one way or the other find their presence on virtual space. Also in my personal view, “As the Internet Never Forgets, Let’s Forgive!”