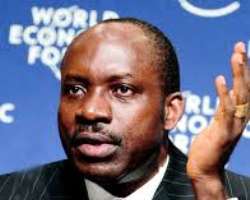 Three policemen attached to him were not as lucky as they were gunned down by the unknown gunmen who invaded the venue of a political even being hosted by Soludo, who is a contender for the gubernatorial ticket of All Progressives Grand Alliance in Anambra State.

Soludo was to meet with youths of his hometown as part of groundwork for his bid for the post of the governorship position of the state.

Anambra State commissioner for Public Utilities, Mr Emeka Ezenwanne, was abducted by the gunmen during the attack.

A report by Vanguard cites an eyewitnesses as saying, “Three policemen were shot dead during the meeting. I can't confirm the whereabouts of Professor Soludo. There was a stampede and I cannot confirm where Soludo is now.

“I only learnt that the state Commissioner for Public Utilities, Engineer Emeka Ezenwanne, was taken away, but I have not heard about the whereabouts of Soludo.”

The Rainbow however learnt that the former CBN was safely shepherded to safety by his security aides.

He explained that the details are still sketchy but reports from his men in the area said some gunmen stormed Isuofia Townhall where Professor Soludo was having a meeting with the youths of the community.

In the ensuing bloody confrontation, the police boss explained that three policemen were gunned down while the state Commissioner for Public Utilities, Emeka Ezenwanne, was taken away by the gunmen.

The police commissioner also assured residents of the state that every detail about the incident will be made public as they unfold.