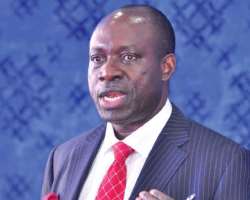 A gathering of mainly the youths of Isuofia, home town of Prof Charles Soludo was invaded by unknown gunmen. At the end of the invasion, two lifeless bodies of police officers attached to him were found while their guns were stolen by the gunmen.

The meeting at the Community town hall was disrupted as all participants ran for their lives.

Though the whereabouts of Prof Soludo is not known at this time, it is believed that he is safe. The casualty figure is expected to increase according to an eyewitness.