Why Buhari did not transmit power to Osinbajo: Presidency 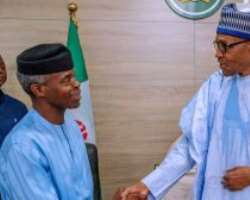 Given the time span of the visit of President Muhammadu Buhari to London for medical checkup it is not necessary for the President to transmit power to the Vice President, Professor Yemi Osinbajo, nthe Presidency has said.

The Senior Special Assistant to the President on Media and Publicity, Garba Shehu, said on Tuesday when he featured as a guest on Channels Television's Politics that President Buhari has not contravened the laws of the land by not transmitting power to Professor Osinbajo while away from the country for a number of days.

“He (Buhari) will continue from wherever he is,” Shehu said when asked if the President had transferred duties to the vice president.

“The requirement of the law is that the President is going to be absent in the country for 21 days and more, then that transmission is warranted. In this particular instance, it is not warranted.”

Buhari departed the Presidential Villa for the Nnamdi Azikiwe International Airport in Abuja at about 2:30pm after which he proceeded to London for what the presidency said was ‘a routine medical check-up.’

The Presidency had said the President was expected back in the country in the second week of April.

President has embarked on several medical trips to the United Kingdom to seek medical care.

But the global lockdown as a result of the COVID-19 pandemic has ensured that he could not travel out last year.

Shehu dismissed any insinuations that the was sick, stressing that there was no emergency for the President to travel to London.

It was just a routine medical check-up just as he had done in the past, he said.